Washington, DC – Political talk here has focused on expanding health care for on one group – the elderly. But behind the scenes a parallel discussion is growing about paying medical bills for another huge group, poor children, and their mothers.

From the states, welfare department officials are calling their Senators and House members to complain about the fast rising cost of hospital care and its impact on their already slim budgets. Policymakers, state officials and community leaders also fear that the lack of access to health care can hurt welfare recipients who may be trying to get an education or hold a job.

So, at least some of the private discussions about increasing health care coverage are linked to the idea of expanding the current welfare system of cash payments to categories of low-income people: mothers with children as well as the elderly, blind, and disabled Americans. They are eligible because they have low incomes, with the level set by each state. 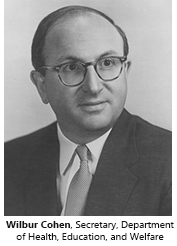 Wilbur Cohen, HEW Assistant Secretary for Legislation and the White House point man on health legislation this year, is a long-time advocate for a major expansion of government to provide widespread health care coverage without limiting it to those on welfare. The bills under discussion in Congress don’t have any such provisions, but Cohen’s reputation in this area is well known, White House sources acknowledge. Nobody in the Administration would offer any on-the-record speculation on whether Cohen’s political role might extend beyond lobbying for the current Medicare approach to pay hospital bills for the elderly.

A potential Cohen ally is his long-time friend, Robert Kerr (R-Okla), a powerful member of the Senate.  Back in 1960, Kerr hired Cohen to work on legislation, paying his salary personally rather than placing him on committee staff. The idea for an expanded aid program came to Cohen in 1942 after seeing the state of Rhode Island attempting to tap into public assistance funds to pay doctors and hospitals. Cohen helped Kerr devise the bill that became the Kerr-Mills law, which made available federal funds to the states so they could pay medical bills for some of the elderly poor.

The co-author of the 1960 legislation was Rep. Wilbur Mills (D-Ark.), the influential chairman of the House Ways and Means Committee. Kerr-Mills has fallen short of its promise, with only 248,000 Americans covered. When the bill was passed, it was predicted that two million people would sign up. Figuring out how to expand coverage for the poor elderly is the focus of House and Senate hearings that will open soon.

The notion of having state welfare programs provide health care coverage got a bipartisan boost in 1954 when Cohen started working on the idea with Nelson Rockefeller, who was Undersecretary of the Department of Health Education and Welfare in the Eisenhower Administration. Cohen and Rockefeller developed a proposal for federal matching grants to state welfare departments to make payments to doctors and hospitals for medical care for the blind, the disabled, and mothers with children under age 18 who were on welfare (Rockefeller is now governor of New York). These federal grants were included in the Social Security Amendments of 1954 and then expanded as part of the Kerr-Mills program in 1960 to allow states to cover low-income elderly. People didn’t have to be enrolled in welfare to be eligible. If their medical bills reduced their income to the welfare level, then their medical bills would be paid. For the first time, federal money was available for people who were not on welfare.

William Cohen, in private talks with legislators and their staffs, is hinting about the need for a big expansion of this federal financial help for people who are not elderly.  No word from the White House, but the President plays cards close to the vest. It seems unlikely he would make Cohen his policy leader and negotiator on health care if he didn’t like Cohen’s ambitious ideas on the subject.

Special thanks to Judith D. Moore, healthy policy analyst and historian, for her lending her expertise to this installment of Covered.

►See the next post in the COVERED series, “Key House Committee Considers Hospital Care for the Elderly,” January 27, 1965