How Things Get Done In Washington: Insights From 23 Former CMS Leaders

This piece was originally published on the Health Affairs Blog on April 20, 2016.

If you like the series House of Cards, or perhaps you simply want a better understanding of how things get done in Washington D.C., you may want to check out a new resource from the National Academy of Social Insurance (The Academy). Insights from the Top: An Oral History of Medicare and Medicaid is a series of 23 individual interviews with former administrators and acting administrators of the Centers for Medicare & Medicaid Services (CMS) and its predecessor, the Health Care Financing Administration (HCFA). The Academy conducted the project as part of its celebration of the 50th anniversary of Medicare and Medicaid. 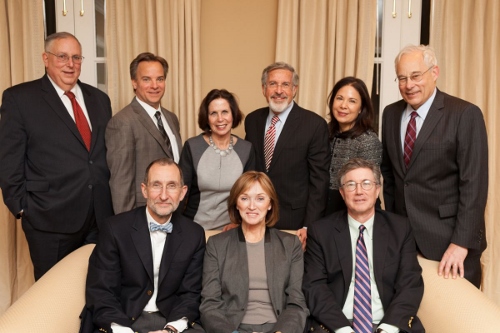 The interviews, conducted by Edward Berkowitz, professor of history at George Washington University, give us a first-person perspective into the transformation of the American health care system. There are a number of themes that Berkowitz consistently draws out of his interviewees. I highlight a few examples below.

Art Of The Deal: The Affordable Care Act

Across several interviews, we hear about how the failure of the Clinton Administration’s health care reform effort influenced the Obama Administration’s approach to securing passage of the Affordable Care Act (ACA). While many former Clinton officials went on to serve in the Obama Administration, no figure is quite as integral as DeParle. She provides a compelling account of her experience at the Office of Management and Budget (OMB) and HCFA, and how it influenced her decisions as one of the chief negotiators of the Affordable Care Act.

Both DeParle and her deputy, Michael Hash, describe dynamic interactions with the House and Senate. DeParle notes the strong impact of Speaker Nancy Pelosi’s leadership in avoiding the jurisdictional quagmire that lead to failure in the past. Hash answers the question on whether the long days and nights at the White House were worth the sacrifice when he describes the midnight champagne toast made by President Obama to the White House health reform team on the Truman balcony after the passage of the Affordable Care Act.

Prior White House Experience Not Required, But Helpful

Many Administrators had prior White House experience (Roper, Scully, Wilensky, DeParle, and McClellan, for example) that had a profound impact on how they approached politics and health care policy making. One of the most interesting discussions is Scully’s work with Presidents George H.W. Bush (41) and George W. Bush (43).

Wilensky and Scully both describe President Bush (41) as someone who was intimately involved in key health policy issues, including saving the Catastrophic Coverage Act, revising physician payments, and the passage of the Americans with Disabilities Act. McClellan and Scully both attest to President Bush’s (43) strong interest in expanding the program to include prescription drugs which ultimately resulted in the passage of the Medicare Modernization Act.

President Bush (43) set clear policy objectives to modernize the Medicare program as efficiently as possible. McClellan, who served in both the Clinton Administration (Treasury Department) and Bush Administration (Council of Economic Advisors), went on to lead the Food and Drug Administration and then to CMS to implement the prescription drug benefit. In one of the most vivid examples of how life can impact policy, McClellan tells the story of how he was dispatched to the corner of 17th street and Pennsylvania Avenue (in front of the White House) to investigate a protest by a group called ADAPT, which ultimately resulted in the Administration’s Initiative for “Money Follows the Person” to allow individuals with disabilities to stay in their home.

Leonard Schaeffer, William Roper, and William Toby each provide unique perspectives on how academia, government, and the private sector intersect in policy development. Toby gives witness to how the decentralization of HCFA impacted his management style as Administrator, which resulted in the development of the agency’s strategic plan which still helps guide its principles today. I was particularly struck by Toby’s description of his experience with the National Urban League and being a soldier in the civil rights movement. He provides a powerful testimony to the Johnson Administration’s efforts to create more opportunities for African Americans in the senior management levels of federal government.

Schaeffer and Roper discuss the need to align incentives that led to the evolution of capitation payment and its impact on models of care. Schaeffer notes that former Administrators meet periodically to discuss policy and often lend support to the incumbent regardless of party affiliation. Roper also comments on the unique “club” of former administrators. Schaeffer observes of his post-public service life that you either stay in Washington to fight or by “virtue of not working in DC, but having real health care experience elsewhere, be considered an expert.” Roper’s interview shares his perspective on managing the largest payers and providers besides HCFA, including Prudential and the University of North Carolina Health System.

Each interviewee praised the dedicated men and women who work at CMS. The Academy’s Insights from the Top provides us with some of the best examples of public service, whether Democrat or Republican, that this country has to offer.