Working closely with Robert Ball, Founding Board Chair of the National Academy of Social Insurance, Bob Dole played a leading role in the Social Security Amendments of 1983. In the early years of the Academy, he also served as an invaluable source of guidance to Founding Board Members and helped shape the Academy as a non-partisan resource.

Working with Senator Daniel Moynihan in 1983, Senator Dole’s leadership prevented a crisis in Social Security by coming together for one of the most meaningful bipartisan agreements in the last four decades. Then-Senator Dole was Chair of the Senate Finance Committee and served on the Greenspan Commission. In an interview as part of the Academy’s 25th anniversary in 2011, Senator Dole recalled how he and Senator Moynihan agreed: “We can’t let this Commission fail. There are 30 million people relying on Social Security…We finally got a bill passed.” Senator Dole singled out “the work of the two Bobs – Bob Myers and the real leader, Bob Ball,” in helping the Commission reach an agreement that led to the Social Security Amendments of 1983. 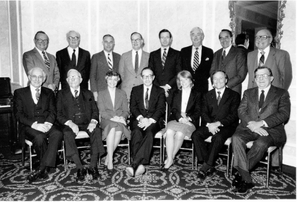 In 1988, shortly after the Academy began its operations, Senator Dole, ranking minority member of the Subcommittee on Social Security and Family Policy of the Senate Finance Committee at the time, again joined with Senator Moynihan, then Chairman of the Subcommittee. They asked the newly-formed Academy to conduct an in-depth study of the Social Security benefit “notch” question. This was one of the first publications of the Academy and helped to inform the 1992 bipartisan congressional Commission on the Social Security “Notch” Issue.

When Senator Dole accepted the Republican nomination for President in 1996, he told convention delegates:

“…And I have learned in my own life, from my own experience, that not every man, woman or child can make it on their own. And that in time of need, the bridge between failure and success can be the government itself. And given all that I have experienced, I shall always remember those in need.”

During his 1996 convention speech, Senator Dole also reiterated the need to preserve, strengthen, and protect Medicare.

Senator Dole was the Republican Presidential nominee in 1996, and Vice Presidential nominee in 1976. He represented Kansas in the U.S. Senate from 1969-1996, serving part of that time as Senate Majority Leader. He served as special counsel at the law firm of Alston & Bird and was one of the co-founders of the Bipartisan Policy Center. Senator Dole was married to former Cabinet Member and former U.S. Senator Elizabeth Hanford Dole of North Carolina. 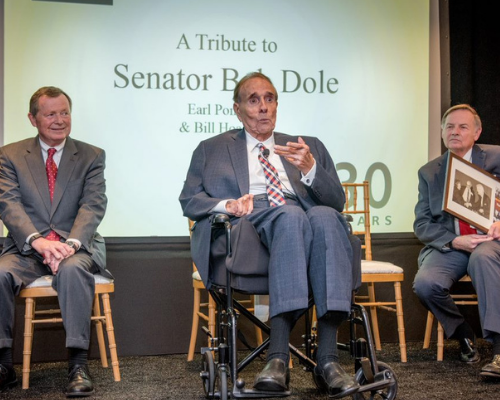 Senator Dole gives a keynote speech at the Academy’s 25th anniversary celebration in 2017. The Academy also commemorated his work on the 1983 Social Security Amendments with a commemorative plaque presented by Academy Board Members, Earl Pomeroy and Bill Hoagland.

“Bob Dole was a genuine American hero and the nation has suffered a loss with his passing,” said Earl Pomeroy, a Member of the Academy’s Board of Directors, and former Member of the U.S. House of Representatives. “His long life of success was driven by iron will, hard work, a great sense of humor and rock-solid values forged while growing up in a small town in Kansas. He was an influential force in national politics for almost 60 years – consistently holding the interests of the country before partisan politics or self-interest. He sought to understand how the economic circumstances of families in Kansas and across the country were dramatically improved by the protections provided.”

Earl also noted: “One of his greatest achievements involved his leadership, along with Democratic Senator Patrick Moynihan, to save Social Security in 1983. They instigated a bipartisan Commission which advanced reforms enacted by Congress to save the Trust Funds from imminent insolvency. This legendary achievement continues to demonstrate to this day the potential of both parties to work together to address urgent complex problems. Even at the age of 98, Bob Dole worked to be constructively involved in making things better. He was, by every measure, a truly great American.”

“Throughout his nearly 36 years in Congress, Senator Dole worked across the aisle on a number of issues,” said Bill Hoagland, former Academy Board Member and Senior Vice President at the Bipartisan Policy Center. “He was an early champion of the Americans with Disabilities Act and continued to speak on issues involving our nation’s veterans and health care. His life, his military service and career remind us of what it means to be a statesman and a dedicated public servant. I am proud to have called him my friend.”

The Academy is exploring ways to commemorate and extend Senator Dole’s legacy of bipartisan leadership on social insurance issues. Please contact Bill Arnone, CEO, at warnone@nasi.org, if you would like to be involved. 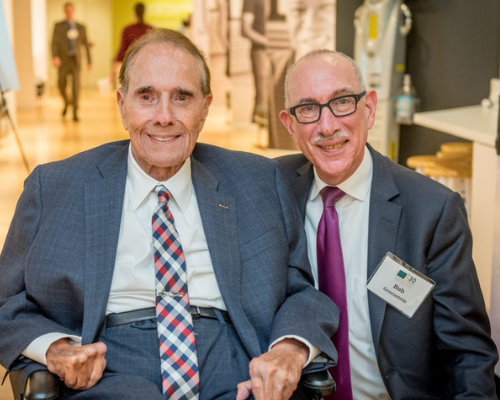 Senator Dole with Bob Greenstein, founder of the Center on Budget and Policy Priorities and recipient of the Academy’s 2021 Robert M. Ball Award, at the Academy’s 30th anniversary celebration in 2017. 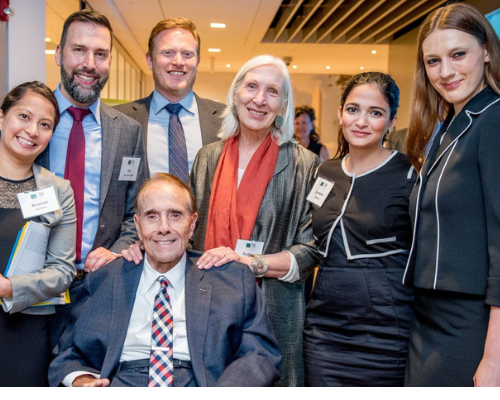