Prior to the racial violence of 2020, and the nationwide multiracial and multigenerational outcries for justice that ensued, many Americans were not aware of the significance of June 19, 1865, in our nation’s history, or the corresponding holiday known as Juneteenth.

Legal historian Annette Gordon-Reed examines the history of June 19th in her gem of a book, On Juneteenth. Texas was the last state to end legalized slavery when, on June 19, 1865, more than two years after President Abraham Lincoln’s Emancipation Proclamation, Union soldiers led by Major General Gordon Granger entered Galveston, Texas, to report that the Confederacy had surrendered two months earlier. In December 1865, the Thirteenth Amendment to the U.S. Constitution codified the end of slavery into law for four million Black Americans upon its ratification.

Gordon-Reed reminds us: “while legalized slavery ended, the racially based hierarchy it put in place remained.” Continuing to commemorate June 19th is, according to Gordon-Reed, “a good thing in the context of our national history; broadening our understanding of who we were and who we are now.” 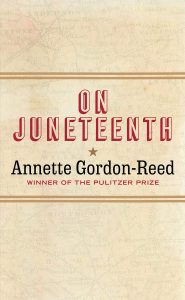 ‘On Juneteenth’ by Annette Gordon-Reed, winner of the Pulitzer Prize

Just in time for 2021, President Biden has signed a bill to make June 19 a federal holiday. Last year, a resolution to make Juneteenth a national holiday passed in the U.S. Senate but did not make it to the House for a vote. (As part of the Academy’s efforts to address racial injustice, we designated Juneteenth as a permanent holiday for all staff beginning last year.)

Jamelle Bouie, writing in The New York Times (June 18, 2020), pointed out: “Paid holidays, while nice, are a grossly inadequate response to calls for justice and equality.” The true meaning of Juneteenth, he wrote, is that “our experiment in liberty owes as much to the men and women who toiled in bondage as it does to anyone else in this nation’s history.”

“We must make ourselves comfortable with the notion that, for the privileged, equality will feel like oppression, and that things – legacy power, wealth accumulation, cultural influence – will not be advantaged by whiteness.” True equality, in his words, “threatens…privilege, when it actually starts to cost…something.”

Much has happened in my life to remind me of the pressing need to address systemic racism and structural inequality with lasting impact. In the late 1960s and early 1970s, I migrated from traditional Democratic politics as a Senate and campaign staffer for Robert F. Kennedy to anti-Vietnam war and anti-poverty activities. What I did not come to grips with, however, was my own position of privilege due to my race and gender. That privilege led to a smooth transition from activism as a young adult, to a professional career in business consulting with large corporations, and then nonprofit service.

Several years ago, I commented to an Academy staff member – only somewhat facetiously – that I never thought I might feel part of the “oppressed minority” of older white men. The response was blunt and remains unforgettable: “When you come from a life of privilege, equality feels like oppression.”

For me in my role as the Academy’s Chief Executive Officer, Juneteenth is more than a mere symbol. Recognizing Juneteenth’s significance serves as a regular reminder of the progress yet to be made in achieving the ideals and living the values that we profess as social insurance experts. 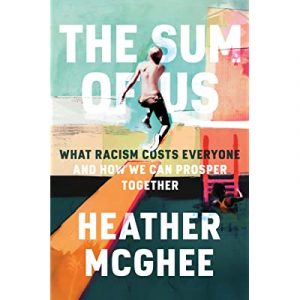 “The Sum of Us: What Racism Costs Everyone and How We Can Prosper Together” by Heather McGhee

In an article for The New Yorker (May 25, 2020), Nicholas Lemann looks at The Broken Heart of America: St. Louis and the Violent History of the United States, authored by Walter Johnson, a leading historian of slavery. Lemann’s article begins by pointing out how historian Eric Williams had first argued back in 1944, in Capitalism and Slavery, that slavery was central to the rise of capitalism. According to Lemann, Johnson’s 2020 book explains how slavery is the foundational institution of American capitalism. Johnson describes “racial capitalism” as the exploitation of Black people based on hostility of working-class whites.

“Broader reforms that aimed, at least, to smooth the roughest edges of capitalism—like the regulation of business excesses or the creation of Social Security and Medicaid—are, we gather, no match for white supremacy.”

Indeed, social insurance is also intertwined with capitalism’s roots in the U.S. Supporters of capitalism recognized that “citizens would take the risks such economies require only if they are provided with a degree of security against old age, unemployment, the sudden death of a spouse and the vicissitudes of health.” However, some social insurance programs designed to address the rough edges of capitalism reinforced structural racism, including the 1935 Social Security Act’s exclusions of categories of workers who were predominantly people of color.

“Lincoln developed a winning political platform for the Republicans in which slavery was opposed mainly because it competed with the economic interests of white farmers and laborers.”

We must recognize how much racism harms all of us, as Heather McGhee makes so clear in The Sum of Us: What Racism Costs Everyone and How We Can Prosper Together. She notes: “We suffer because our society was raised deficient in social solidarity.”

Many of us in the social insurance community have long recognized this challenge. As I noted in my May 2019 post on socialism and social insurance, quoting political scientist, Daniel Béland:

“Because the American ideological repertoire is centered on individualism and self-reliance, there is little room for discourse about social solidarity in the field of social policy reform.” (Social Security: History and Politics from the New Deal to the Privatization Debate)

Addressing this deficiency in our discourse remains a continuous concern, as the Academy and our partners seek to ensure economic and health security across the life course for all of us, which is at the heart of our new multi-year campaign for Pathways to Economic Security.

Are you an Academy Member doing work on social insurance and racial justice? We invite you to share your work. Please email me at warnone@nasi.org. Thank you for contributing to the Academy’s efforts to address racial injustice.