Results from the 2012 NASI Summer Academy: A Young Person’s Perspective of Social Security

Every year the National Academy of Social Insurance (NASI) hosts Demystifying Social Security, a day-long academy for young people in Washington, DC.  During the event, attendees are asked to consider policy options for reform that would determine the future of Social Security.  The results indicate that young people, like other Americans, value Social Security and support moderate policy reform to strengthen the program.

These views on Social Security are consistent with broader surveys of the American public such as those conducted by NASI and the Institute for Women’s Policy Research.

NASI’s annual summer academy in Washington, DC, was developed to educate interns, young professionals, and students on Social Security. With the projected depletion of the Social Security trust fund, the attendees were asked about policies that address adequate coverage for Social Security beneficiaries, as well as the program’s financial solvency.  The 100 participants were each given a copy of NASI’s Fixing Social Security: Adequate Benefits, Adequate Financing and a worksheet with blanks for solvency and adequacy options. They were then divided into eleven groups and asked to discuss and produce a budget-balancing package.

The Results: The 2012 Summer Academy Policy Package
Based on this exercise, the attendees at the 2012 Social Security Intern Academy decided on a plan to address Social Security’s solvency and adequacy as follows:

The 2012 Social Security Academy focused on policies that both improve the adequacy of benefits and increase Social Security’s revenues.  Since participants were asked to address adequacy in addition to solvency options and benefit reductions, these results reveal an additional layer of public opinion that many public opinion polls neglect.  The young professionals overwhelmingly opted not to cut benefits.  The two main focuses of their package are as follows: improve the adequacy of the benefits and improve solvency through increasing revenue.

Options to Improve Benefit Adequacy
The adequacy of Social Security’s benefits was discussed because benefit amounts are modest, and much of America’s aging population, as well as many disabled workers, rely on Social Security’s benefits.  That reliance has intensified since the beginning of the recession in late 2007.  Compounding this problem, the modest benefits have not kept up with rising health care and housing costs faced by many Americans.  Perhaps due to this gap, ten of the eleven groups supported at least one of the options to increase the adequacy of benefits.  The groups tended to support adequacy options that increase benefits for vulnerable groups including children, the poor, and the oldest of the old. These populations were targeted through the following most popular options: 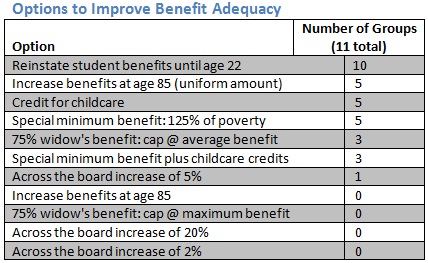 Options to Increase Revenue for Solvency
Since its beginning, Social Security has been financed as a “pay as you go” system, which means that current contributions of current workers fund the benefits of current retirees. As the baby boomer generation ages, the number of workers per beneficiary falls, which has led many to question the future financing of the program.  To address the issue of solvency, the following four policy options were chosen by the NASI Summer 2012 Academy participants: 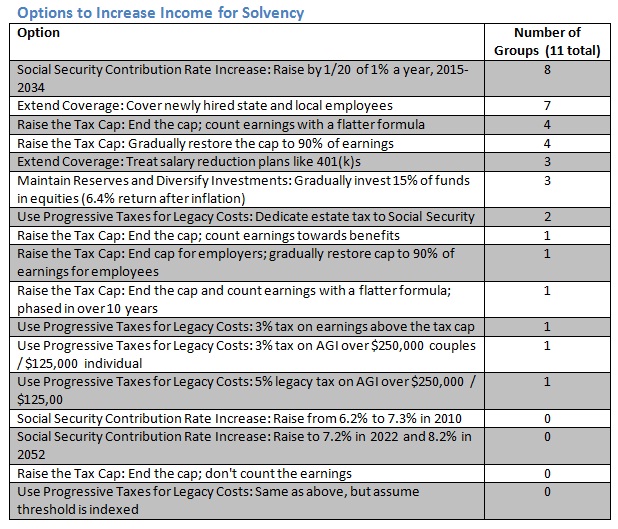 The consensus reached by these groups shows that young people are committed to maintaining the effectiveness of Social Security and ensuring its presence for future generations.  The groups tended to highlight revenue-generating options and benefit expansions in their plans; only four groups at the Social Security academy included a benefit reduction option in their packages.  The most popular benefit reduction option, lowering the spousal benefit, was only adopted by two tables. The other options, which were adopted by one table each, include benefit reduction options most often discussed among policymakers: switching to a chained CPI and raising the retirement age. This preference for maintaining benefits implies that attendees value Social Security as it is and would rather increase revenues than cut benefits. 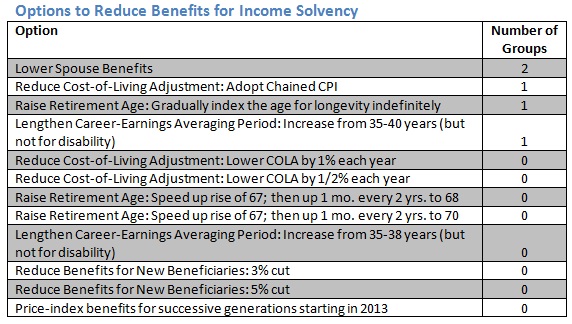 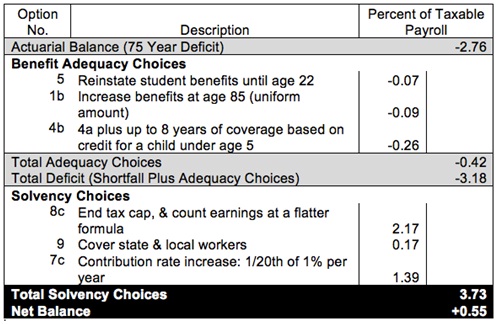