On November 7, 2018, policy experts and local community leaders gathered in Ann Arbor to participate in an educational forum on the future of Social Security. The forum opened with remarks from the Academy’s CEO, William Arnone, and John Laitner, Director, Life-Cycle Economics at the University of Michigan. Arnone and Laitner expressed angst over our social insurance system’s gaps, but were cautiously optimistic regarding potential solutions to improve the system both financially and in terms of human outcomes. With that, the baton was passed to Luke Shaefer, Director of Poverty Solutions at the University of Michigan, who served as moderator throughout the forum’s presentations and discussion.

Considerations for the Future of Social Security: “Restoring Unemployment Insurance as Social Insurance”

Recognizing that Social Security is not the only social insurance program in need of attention, Academy Member Christopher O’Leary, Senior Economist at the W.E. Upjohn Institute for Employment Research, was invited to give a presentation on “Restoring Unemployment Insurance as Social Insurance”. O’Leary’s presentation on unemployment insurance (UI) highlighted the various ways in which our UI system is now inadequate, and gave corresponding policy recommendations to mend each shortcoming.

Addressing long-term unemployment: O’Leary described the increasing fraction of the unemployed who are jobless for at least 27 weeks. Since 1981, this portion has doubled from 14% to 28%. However, there has been no corresponding increase in the average potential duration of regular UI benefits, which has decreased from 24 weeks to 23 weeks over the same time period. O’Leary recommends a potential benefit duration of at least 26 weeks to combat this trend of increased long-term unemployment. This is just one of eight ideas proposed by O’Leary to improve the UI system. Additional provisions can be found in his presentation.

The Academy will continue to help policymakers work towards the strengthening of Unemployment Insurance in addition to ensuring the long-term financial balance of Social Security. 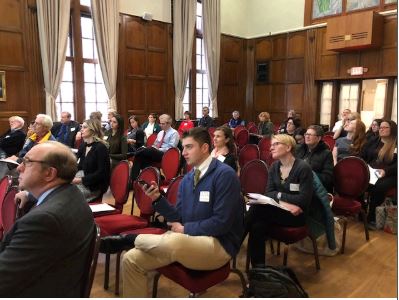 Following O’Leary’s presentation, Jason Fichtner provided a brief overview of how the Social Security program works, especially for those in the audience who may be less familiar with the structure of the program.

Fichtner then delivered a keynote presentation originally prepared by Henry Aaron, Senior Fellow at the Brookings Institution and one of the nation’s top experts on Social Security.

Based on Aaron’s presentation, Fichtner laid out the current issues facing Social Security, the starkly different solutions that have been proposed by each party, and the program Aaron recommends to be the foundation of political negotiations for progressives on changes to Social Security.

A few provisions suggested by Aaron include increasing the progressivity of benefits to offset the growing gap in lifespan between low and high earners, phasing out the antiquated spousal benefit, and reviving the special minimum benefit so that long-term low wage earners have sufficient benefits to live  on in retirement. (See below for more details.) 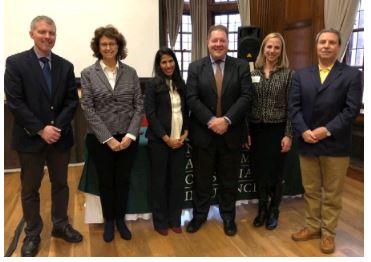 Discussants (in addition to Fichtner):

Rachel Greszler, Research Fellow in Economics, Budget and Entitlements at the Heritage Foundation

Nirupama Rao, Assistant Professor in Business Economics and Public Policy at the Ross School of Business, University of Michigan

Barr’s remarks focused on the constant tension between individual equity and social adequacy, both of which Social Security attempts to fulfill. Individual equity references one’s benefits being based on one’s earning history and contributions, whereas social adequacy refers to benefits meeting one’s financial needs. Using an evaluation tool developed by the American Academy of Actuaries, Barr contends that Aaron’s proposal would increase social adequacy by raising revenue and altering benefits, while decreasing individual equity in many of its reforms.

Rachel Greszler’s remarks focused on Social Security as a poverty prevention program, and how the program could be modernized to fulfill this goal while achieving financial sustainability. Greszler agreed with Aaron regarding the need to alter the program to achieve long-term financial balance, but in stark contrast, her proposed package includes having a flat anti-poverty benefit, raising the retirement age and indexing it to lifespan, and ultimately lowering payroll taxes. Greszler agreed with Aaron that the spousal benefit needs to be modernized, and that the addition of a childcare credit would be beneficial.

Like Greszler, tax economist Nirupama Rao agreed with some aspects of Aaron’s proposal while questioning other provisions. For example, Rao concurred that improving the progressivity of the benefit formula and boosting the minimum benefit would have a positive impact. She added, however, that benefit increases to the long-lived should be targeted through means testing. Rao also mentioned the fact that higher income workers are more likely to receive healthcare benefits through their employers, so including said benefits in the tax base would be sensible. In terms of taxation, Rao cautioned against weakening the tight link between benefits and taxes insofar as this connection drives the program’s popularity. Rao also spoke more generally concerning the vast growth in entitlement expenditures. She explained this phenomenon as the result of an aging population and rising health-care costs, and therefore stated the need to “bend” the health-care cost curve downward if entitlement solvency is to be achieved.

Fichtner, Barr, Greszler, and Rao also took questions from the audience regarding their respective presentations, and general questions regarding the state of Social Security. Audience members raised a number of excellent points, including the risks of redefining Social Security specifically as an anti-poverty program, which would be a departure from social insurance. Other audience members were enthusiastic about the process of looking at the overall design of Social Security to better reflect significant economic and demographic changes since the program was founded in 1935, and since Congress last enacted major Social Security legislation 35 years ago.

View the full list of provisions in Henry Aaron’s proposal. Read the recap from the Academy’s Chicago Forum on the Future of Social Security (September 2018). 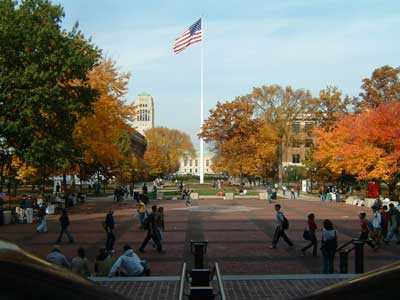