We asked Larry Summers for a social insurance agenda, and here’s what he suggested

On October 16, 2017, Members of the National Academy of Social Insurance, as well as other experts and supporters, gathered in Cambridge, Massachusetts to discuss our nation’s social insurance programs and how they are addressing – and could better address – the challenges posed by growing inequality.

The Academy’s Board Chair, Bill Rodgers, Professor of Public Policy and Chief Economist at the Heldrich Center for Workforce Development at Rutgers University, sat down with Professor Larry Summers for a fireside-style chat.

The discussion was recorded via Facebook Live. To hear the full conversation between Professor Summers and Professor Rodgers, as well as remarks from former Massachusetts Governor Michael Dukakis, please visit the Academy’s Facebook page.

Here are a few highlights from the conversation between Larry Summers and Bill Rodgers:

On supporting the Academy’s work:

Summers: “It is hugely important to be supporting the work of the Academy and to be supporting our nation’s infrastructure of social insurance. These are programs that are central to the kind of society we are. I would argue that it is the fact that we have too little social insurance, not the fact that we have too much, that is at the root of our political difficulties. And I would argue that the social insurance that we have is in jeopardy to the extent that has not been the case historically. The kind of broad-based movement that the National Academy of Social Insurance represents is hugely, hugely important. And so you’re doing really important work.”

On secular stagnation and social insurance:

Summers: “I think something quite profound may well be afoot. If you ask — how long has it been since the United States has enjoyed solid continuing [economic] growth that was rested on a financially sustainable foundation?

The answer is – much the better part of a generation. It is not by secular stagnation that I mean to suggest the absence of any moments where the economy grows. Rather – the difficulty in growing in a sustained way.

Why is this? It’s hard to know. One way of thinking about it would be to suggest that there are a variety of trends – longer life expectancy, more insecurity, more inequality, more profits growing to corporations, more exports of capital from surplus countries like China and Germany — that have raised the supply of savings. At the same time, my cell phone has more computing power than the Apollo project and costs $600, [which] is indicative of the fact that there’s much less capital that the economy needs to invest in.

In the 90s, index bonds paid close to 4% for a 10-year bond. Today, they pay close to 0%. This is a very fundamental kind of change in our economy. This is also a change that is fundamental to the calculus of Social Security policy.

Social Security can overtime pay a rate that corresponds to the economy’s growth rate. Because the next generation pays X % of its income, the benefit will be going up by X %. In an era when the interest rate was significantly in excess of the growth rate, there was a lot to be said for finding ways to invest money directly, rather than in a pay-as-you-go Social Security.

In the current era when the return is much lower, the benefit of a scheme like Social Security is that much greater. Of course, that’s apart from the fundamental social insurance aspects and the fundamental inequality reduction aspects.

Secular stagnation is very important for understanding the economic dilemmas of our moment, and it’s very relevant for thinking about social insurance policy.”

A Founding Member of the National Academy of Social Insurance, Lawrence H. Summers is currently the Charles W. Eliot University Professor at Harvard University and Weil Director, Mossavar-Rahmani Center for Business & Government, at the Harvard Kennedy School. He served as the 27th president of Harvard from 2001 to 2006. Prior to leading Harvard, Professor Summers served as Secretary of the Treasury from 1999 to 2001. He served as director of the National Economic Council for President Barack Obama from 2009 to 2011.

Join Professor Summers, and many other policy experts, in supporting the Academy’s work. Make a financial donation today or learn more here. 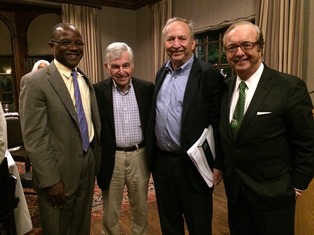