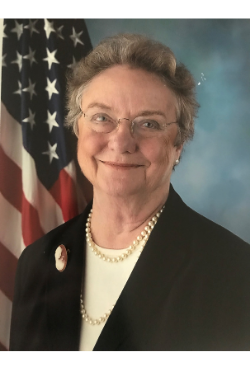 Virginia Reno is widely recognized for her expertise on Social Security, retirement policy, private pensions, the income of the elderly, and disability policy. Reno served as the Deputy Commissioner for Retirement and Disability Policy at the Social Security Administration (SSA) from 2015-2017. As the Deputy Commissioner, Reno directed and managed the planning, development, and issuance of operational policy and instructions for the SSDI and SSI programs and initiatives to improve the economic well-being of beneficiaries. In addition, Reno was the principal advisor to the Commissioner of Social Security on major policy issues and activities in the areas of strategic policy planning, policy research and evaluation, statistical programs, and overall policy development and analysis.

“Gina worked tirelessly as the Deputy Commissioner for Retirement and Disability Policy at the SSA,” said Stephen C. Goss, Chief Actuary at the Social Security Administration, “to expand and improve all aspects of the implementation of the law over which the agency has control, and also in informing both the Administration and members of Congress about the program and the needs and desires of the American people.”

Prior to accepting her role as Deputy Commissioner, Reno served as Vice President for Income Security at the National Academy of Social Insurance (the Academy). Reno led the Academy’s work on retirement income, workers’ compensation, disability insurance and related programs for over two and a half decades. Her insight, dedication, and leadership were instrumental in shaping the Academy’s research and helping the Academy become known for objective, thorough analysis of significant issues.

“Gina’s tireless work on behalf of Social Security, over the course of a long and exemplary career, has unquestionably helped to strengthen the U.S. social insurance system,” according to Tom Bethell, writer and frequent collaborator with Robert M. Ball on social insurance topics. “I can’t think of anyone who better exemplifies the values that Bob Ball stood for. And she’s a joy to work with!”

According to Michael Graetz, Professor of Tax Law at Columbia Law School, Virginia Reno’s “contributions to social insurance are prodigious, from her work on disability to making it clearer to the public when to take Social Security, as well as her many additional contributions to the work of the Academy and excellent work on reports like Uncharted Waters. Not to mention her second career at the Social Security Administration. Her scope of contributions is really unmatched.”

Reno has testified frequently before Congressional committees and published numerous research articles on Social Security, disability policy, private pensions, retirement policy, the income of the elderly, public opinion about Social Security, labor force participation of women, and the treatment of women and families in benefit and tax systems. She received the SSA’s Commissioner’s Citation twice, including once from Robert M. Ball himself.

Before coming to the Academy, Reno held research and policy positions at SSA. She was staff director of the Policy Council that advised the Commissioner of Social Security on legislative, regulatory and administrative issues and directed the program analysis staff in SSA’s office of research and statistics.

A founding member of the Academy and a former fellow of the TIAA-CREF Institute, Reno received her B.A. from the Honors College of the University of Oregon and served in the U.S. Peace Corps in Liberia.