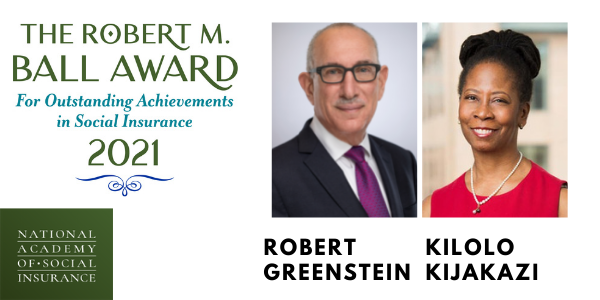 Greenstein has dedicated his life to strengthening social insurance and other programs that enhance economic security. Bob’s leadership built the Center on Budget and Policy Priorities (CBPP), which he founded in 1981 and led through 2020, into a major force for helping shape federal and state policy on public programs, from Medicaid to Unemployment Insurance to Social Security and more. Thanks to his leadership and CBPP’s impactful work, millions of low-and moderate-income Americans have benefited from evidence-based policymaking. Read his full profile below.

Kilolo Kijakazi has been at the forefront of addressing economic and social issues affecting people of color and women, including structural racism and the racial and gender wealth gaps. Earlier this year, Kijakazi became Deputy Commissioner for Retirement and Disability Policy at the Social Security Administration (SSA), bringing her expertise on social insurance and retirement policy to lead the department’s policy development and research activities. She has since been named Acting Social Security Commissioner by President Biden. Read her full profile below.

"Bob and Kilolo are a natural duo for this year’s Ball Award,” said William Arnone, Chief Executive Officer of the Academy. “They have worked closely together over the years on key social insurance and related policy issues and have made truly extraordinary contributions to help improve the well-being of millions. Their latest collaboration was their serving so diligently on the Academy’s Economic Security Study Panel, whose report will be issued soon. All of us owe them our deep gratitude for their wise insights, and we greatly look forward to honoring them in November.”

See a list of previous recipients of the Ball Award.

Unable to attend but would still like to support? Please consider making a gift in honor of Kilolo Kijakazi and/or Bob Greenstein to the Academy’s Robert M. Ball Fund for Leadership Development. Gifts of any amount are greatly appreciated and are 100% tax-deductible. Receipts will be emailed automatically.

See a list of sponsorship options below or make your contribution today.

Renée M. Landers, Chairwoman of the Board, National Academy of Social Insurance

A CONVERSATION WITH THE HONOREES 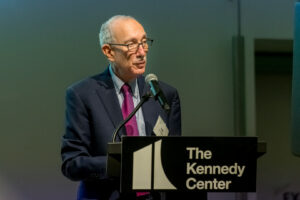 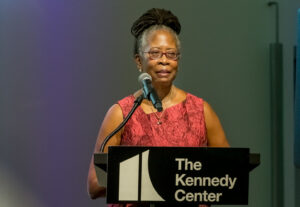 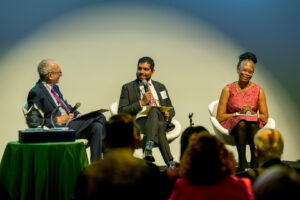 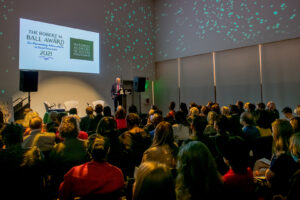 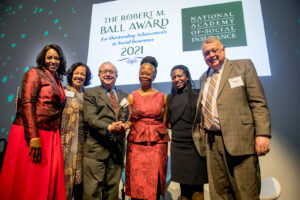 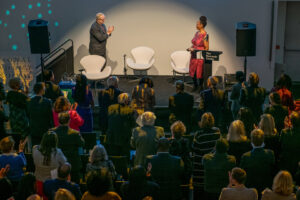 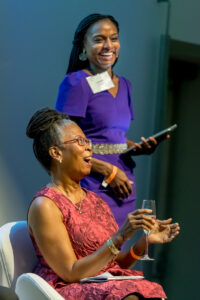 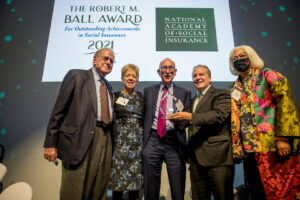 Kenneth S. Apfel, Professor and Director of the Management, Finance and Leadership Program, University of Maryland School of Public Policy

Marty Ford, Senior Advisor, The Arc of the United States

Bethany Lilly, Director of Income Policy, The Arc of the United States

*Academy Board of Directors

All proceeds from sponsorships and registration sales for the 2021 Ball Award support the Academy’s core educational and policy research programs. Your contribution, above the estimated $200 value of the Kennedy Center cocktail reception per person, is tax-deductible. Receipts will be mailed following the event. Registrations are now available. Download the 2021 Sponsor Prospectus.

Refund Policy: All proceeds from registration sales and sponsorships for the 2021 Ball Award program support the Academy’s core educational and policy research programs, including COVID-19 initiatives. In case of event postponement or cancellation, unused registrations and other sponsorship benefits will be converted to a donation to the Academy. For registration purchases only (not sponsorships): As requested, a 50% refund for registration purchases will be issued in the event of full cancellation or postponement of the in-person event beyond fall 2021. Please contact Devin Cowens, External Relations Manager, at dcowens@nasi.org, for any questions.

Thank you for supporting the work and mission of the National Academy of Social Insurance. 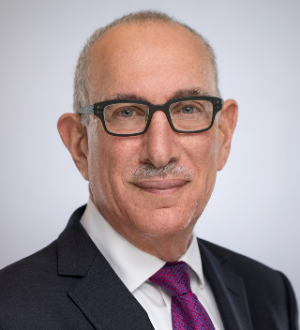 Robert "Bob" Greenstein is receiving the 2021 Robert M. Ball Award for his lifelong dedication to strengthening social insurance and other programs that enhance economic security. Bob’s leadership built the Center on Budget and Policy Priorities (CBPP), which he founded in 1981 and led through 2020, into a major force for helping shape federal and state policy on public programs, from Medicaid to Unemployment Insurance to Social Security and more. Thanks to his leadership and CBPP’s impactful work, millions of low-and moderate-income Americans have benefited from evidence-based policymaking.

“Bob cares deeply about social insurance and the role it plays in creating a more equitable world,” said Bill Arnone, Chief Executive Officer of the National Academy of Social Insurance. “On behalf of the Board of Directors, we are thrilled to honor Bob’s immense contributions to social insurance, including his support for the Academy’s work, most recently serving on our Economic Security Study Panel.”

For over four decades, Bob has been a leading voice on the federal budget and on a range of domestic policy issues, including anti-poverty programs and various aspects of tax and health care policy. He has written numerous reports, analyses, book chapters, op-ed pieces, and magazine articles on these issues. Prior to founding CBPP, Bob was Administrator for the Food and Nutrition Service at the U.S. Department of Agriculture in the Carter Administration, where he directed the agency that operates the federal food assistance programs, including the SNAP and school lunch programs. He helped design the landmark Food Stamp Act of 1977, generally regarded as the Carter Administration’s principal anti-poverty achievement. President Bill Clinton appointed him to the 1994 Bipartisan Commission on Entitlement and Tax Reform. Bob also headed the federal budget policy component of the transition team for President Barack Obama. He now is a Visiting Fellow on the Economic Studies team at the Brookings Institution, where he is affiliated with The Hamilton Project.

“Bob Greenstein is well-respected by both Republicans and Democrats,” said Jason Fichtner, the Academy’s Treasurer and Chief Economist at the Bipartisan Policy Center. “He is passionate about these issues and deeply analytical. As Co-Chair of the Academy’s Economic Security Study Panel, I know first-hand the invaluable contributions that Bob made to its work.”

Bob received one of the six 1991 Public Service Achievement Awards from Common Cause, and he received the MacArthur Fellowship award in 1996. In 2008, he won the Heinz Award for Public Policy for “representing the interests of low-and middle-income Americans on federal budget issues” and the 2008 John Gardner Leadership Award presented annually by the Independent Sector to “an individual whose leadership in or within the nonprofit community has mobilized and unified people, Institutions, or causes that improve people's lives.” In 2010, he received the Daniel Patrick Moynihan Prize from the American Academy of Political and Social Science, which cited him as “a champion of evidence-based policy whose work at the Center on Budget and Policy Priorities is respected on both sides of the aisle.” In 2011, the New Republic listed him as one of Washington’s 25 “Most Powerful, Least Famous People.”

“Bob is a forerunner in the field of social insurance. He has laid the groundwork for advancing a number of important federal and state policies,” said Kilolo Kijakazi, co-recipient of the 2021 Robert M. Ball Award and Deputy Commissioner for Retirement and Disability Policy, Social Security Administration. “It was as a Senior Policy Analyst at CBPP that I learned how impactful Social Security is to the economic security of families. Bob’s attention to detail and total commitment to improving the economic conditions of marginalized families made a profound impression on me. And it was at CBPP that I was able to meet and work on proposed policies with Robert Ball.”

A Member of the National Academy of Social Insurance since 1989, Greenstein has also served on its Board of Directors and co-chaired the Academy’s 21st annual policy conference, Social Insurance, Fiscal Responsibility, and Economic Growth.

Bob received his A.B. from Harvard College and has done graduate work at the University of California–Berkeley. He lives in Washington, DC with his wife, Elissa Parker. In his spare time, he enjoys film, mystery novels, and music ranging from classical to blues to rock and roll. 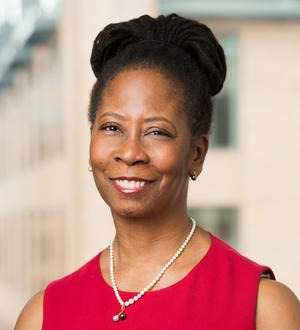 Kilolo Kijakazi is receiving the 2021 Robert M. Ball Award for her innovative work to address economic and social issues affecting people of color and women, including structural racism and the racial and gender wealth gaps. In January 2021, Kijakazi became Deputy Commissioner for Retirement and Disability Policy at the Social Security Administration (SSA), bringing her expertise on social insurance and retirement policy to lead the department’s policy development and research activities. As of July 9, 2021, Kijakazi is Acting Commissioner of SSA.

Kilolo Kijakazi’s work continues to have a significant impact on how we understand the role of Social Security in closing the racial and gender wealth gaps,” said Bill Arnone, Chief Executive Officer of the National Academy of Social Insurance. “On behalf of the Academy’s Board of Directors, we congratulate Kilolo on her outstanding achievements to-date – and we look forward to recognizing and supporting her ongoing work to advance bold, equitable policy changes.”

Kilolo’s numerous publications include her book, African-American Economic Development and Small Business Ownership, and papers, such as: “African American Economic Security and the Role of Social Security,” “The Color of Wealth in the Nation’s Capital,” and “African Americans, Hispanic Americans and Social Security: The Shortcomings of the Heritage Foundation Reports.” She authored chapters in two Academy conference proceeding books, Strengthening Community: Social Insurance in a Diverse America and The Future of Social Insurance: Incremental Action of Fundamental Reform? Kilolo also participated in the 1998 White House Conference on Social Security and has provided testimony to Congress multiple times.

“For many years, Kilolo Kijakazi has been helping to deepen our understanding of the racial wealth gap, and how social insurance principles and programs are part of the solution,” said Virginia Reno, recipient of the 2020 Robert M. Ball Award and a former Deputy Commissioner for Retirement and Disability Policy at SSA. “Thanks to her efforts and innovative grant-making, policymakers are moving towards more effective solutions.”

Prior to joining SSA, Kilolo served as an Institute Fellow at the Urban Institute. Previously, she was a Program Officer in the Financial Assets Unit of the Economic Opportunity and Assets Program at The Ford Foundation, where she focused on building economic security for working families and incorporating the knowledge of people of color into all aspects of the work, including research, policy, and practice. She was also a senior policy analyst at the Center on Budget and Policy Priorities (CBPP), where she specialized in Social Security. As a program analyst for the U.S. Department of Agriculture, Food and Nutrition Service, Kijakazi designed and monitored evaluations of the Food Stamp Program. And Kilolo worked on welfare reform as a policy analysist at the National Urban League.

“I have worked with Kilolo for many years and had the opportunity of working directly alongside her when she was at CBPP.  Her dedication to social insurance and racial equity – and her work on how social insurance reforms can help further racial equity – have inspired many and made important, lasting contributions,” said Bob Greenstein, co-recipient of the 2021 Robert M. Ball Award and founder of CBPP. “I’m honored to receive the 2021 Ball Award alongside her.  Having had the privilege of being able to work with Bob Ball earlier in my career, I am sure he would be very impressed with what Kilolo has accomplished and continues to accomplish.”

Until recently Kilolo served as a board member of the Winthrop Rockefeller Foundation, The Policy Academies, Liberation in a Generation, and the National Academy of Social Insurance. She advised the Closing the Women’s Wealth Gap Initiative; co-chaired the National Advisory Council on Eliminating the Black-White Wealth Gap; served on the DC Equitable Recovery Advisory Group in response to COVID-19, and was a member of the Bipartisan Commission on Retirement Security and Personal Savings. Kilolo also received the Distinguished Public Service Award from the George Washington University in 2019.

“People would not be talking about the racial and gender wealth gaps without the many years of work and leadership that Kilolo has put in.” according to Maya Rockeymoore, former chair of the Maryland Democratic Party.

A Member of the Academy since 1999, Kilolo has also served on the Academy’s Uncharted Waters Study Panel and its Study Panel on Economic Security. She co-chaired the 2016 Academy conference on Disparate Income, Wealth and Opportunity: Implications for Social Insurance with David Colby and Maya MacGuineas. She holds a BA from the State University of New York at Binghamton, an MSW from Howard University, and a PhD in public policy from The George Washington University. In her free time, she enjoys spending time with her daughter and friends, hiking and reading. 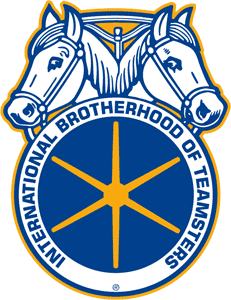 The Arc of the United States