WASHINGTON, D.C. – In 2016, workers’ compensation benefits paid and employer costs as shares of covered payroll dropped dramatically in Ohio compared to the rest of the U.S., according to a new report from the National Academy of Social Insurance (the Academy).

The Academy’s report, Workers’ Compensation: Benefits, Costs, and Coverage, also highlights five-year changes in workers’ compensation benefits paid and costs to employers from 2012 to 2016. Over this period, the decline in employer costs in Ohio as a share of payroll far outpaced the rest of the country. In Ohio, employer costs fell by $0.27 per $100 of covered payroll, compared to a $0.05 decline nationally (Figure 1). By 2016, workers’ compensation costs as a share of payroll were $0.51 lower in Ohio than the national average.

In Ohio, the majority of employers purchase workers’ compensation insurance from an exclusive state fund. Some large employers are allowed to self-insure. According to the report, the state fund accounted for 82 percent of total benefits paid to injured workers and their medical care providers in 2016.

Workers’ compensation benefits paid per $100 of covered payroll in Ohio decreased by $0.28 per $100 of covered payroll over the five-year period, a 27.2 percent decline and the second-largest drop among all 50 states and the District of Columbia. The sustained decline moved Ohio from paying well above the national average in 2012, to well below the average in 2016 (Figure 2).

Dr. Abe Al-Tarawneh, Chief of the Ohio Bureau of Workers’ Compensation (BWC) Division of Safety and Industrial Hygiene, said there have been no changes to the structure of benefits offered to injured workers over this period.

“Declines were primarily driven by continuous decreases in the frequency and severity of injuries coming into the system,” said Dr. Al-Tarawneh. “We have also expanded the reach and effectiveness of BWC’s safety programs and services. Over the past eight years, Ohio reduced occupational injuries coming into the system at a pace far surpassing the rest of the nation.”

“Ohio has made significant gains in managing the costs of workers’ compensation through strong fiscal and financial stewardship, and by controlling and minimizing the effects of inflation on medical care costs,” said Dr. Al-Tarawneh. 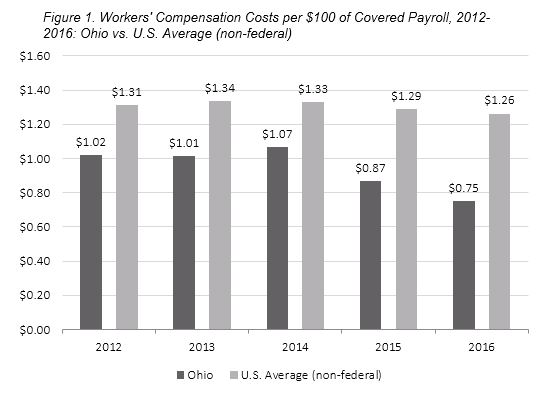 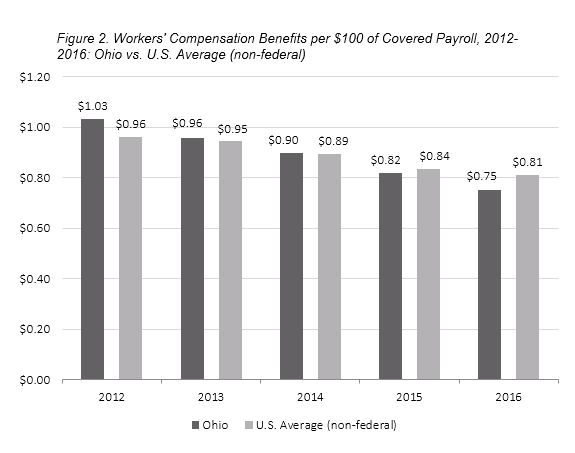