In 2016, Oklahoma’s workers’ compensation costs to employers declined by 13.7 percent to $1.45 per $100 of covered payroll – the third largest decline in the country – while costs in the rest of the country decreased by an average of 2.3 percent to reach $1.26 (Figure 1).

Oklahoma’s workers’ compensation system experienced several significant changes with the passage of Senate Bill 1062 in 2013. The law allowed Oklahoma employers to opt-out of workers’ compensation beginning in 2014, but the option ended in 2016 when it was ruled unconstitutional by the Oklahoma State Supreme Court. In addition, SB 1062 reduced medical provider reimbursement rates, revised the amount and maximum duration of cash benefits paid to injured workers, and established a new administrative system governed by a three-member Workers’ Compensation Commission.

“We probably needed some workers’ comp reform in 2013, but the Oklahoma legislature went too far and slashed benefits so much, it gave our state the lowest benefits in the nation,” said Bob Burke, a workers’ compensation attorney in Oklahoma. “The new administrative system has not sped up benefits to any worker, and the cuts in benefits have harmed nearly every injured worker coming through the system. Especially hit hard are higher paid workers whose maximum TTD is capped at less than $600 per week. In addition, the average PPD award is down about 50 percent.”

In addition to declining employer costs, Oklahoma experienced large reductions in workers’ compensation benefits as a share of payroll. In 2016, workers’ compensation benefits fell 10.9 percent to $0.98 per $100 of covered payroll – the second largest annual percentage decline in the country. Benefits in the U.S. decreased 3.6 percent to $0.81 per $100 of covered payroll.

Across the five-year period between 2012 and 2016, Oklahoma’s benefits as a share of payroll fell 35.9 percent from $1.53 to $0.98 per $100 of covered payroll. The decline in benefits in Oklahoma was the largest in the country and significantly outstripped the national decrease of 15.6 percent, from $0.96 to $0.81 per $100 of covered payroll (Figure 2). Both cash and medical benefits per $100 of payroll declined faster for Oklahoma than for any other state. 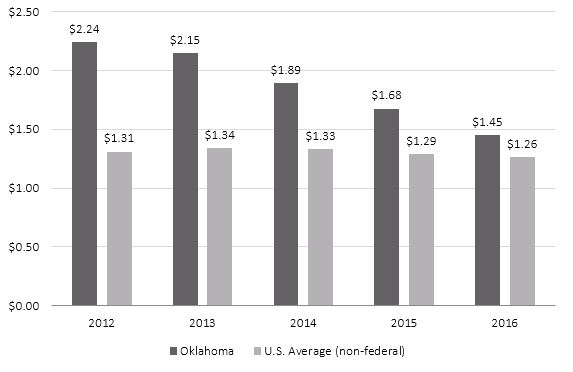 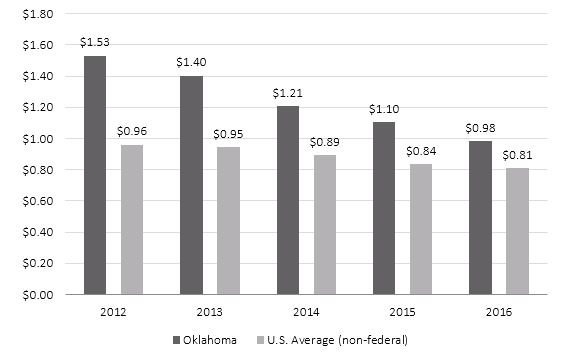