WASHINGTON, D.C.  – Michigan experienced the largest percentage decline in the nation in workers’ compensation benefits as a share of covered payroll in 2016, according to a new report from the National Academy of Social Insurance (the Academy). Michigan also experienced one of the largest percentage declines in workers’ compensation costs as a share of payroll.

The Academy’s report, Workers’ Compensation: Benefits, Costs, and Coverage, also highlights five-year changes in workers’ compensation benefits from 2012 to 2016. Over this period, the decline in workers’ compensation benefits as a share of payroll in Michigan far outpaced the national average. In Michigan, benefits declined from $0.68 per $100 of covered payroll in 2012 to $0.46 in 2016, a decrease of 32.4 percent compared to the 15.6 percent national decline (Figure 1).

“Michigan enacted changes to its workers’ compensation laws in 2011 which likely played a role in the recent declines in benefit paid,” said Marjorie Baldwin, Professor at Arizona State University and co-author of the report. “The new laws made it more difficult for workers to qualify for long-term wage loss benefits by redefining disability and post-injury work capacity, and strengthening the criteria required to establish disability and/or wage loss.”

“Michigan experienced a large shift in relative cash and medical benefit payments during our study period and after the new laws were implemented,” said Christopher McLaren, Senior Researcher at the National Academy of Social Insurance and co-author of the report. “In 2012, medical benefits accounted for only 35.5 percent of total benefits paid in Michigan, whereas in 2016 that ratio increased to 48.8 percent, much closer to the national average of 50.3 percent.”

Over the five-year period from 2012 to 2016, workers’ compensation costs to Michigan employers as a share of payroll generally followed national trends but were well below the national average (Figure 2). Prior to 2016, the gap ranged from 23 to 29 percent. The large decline in costs as a share of payroll in 2016, however, widened the gap between Michigan and the rest of the U.S. to 36 percent. 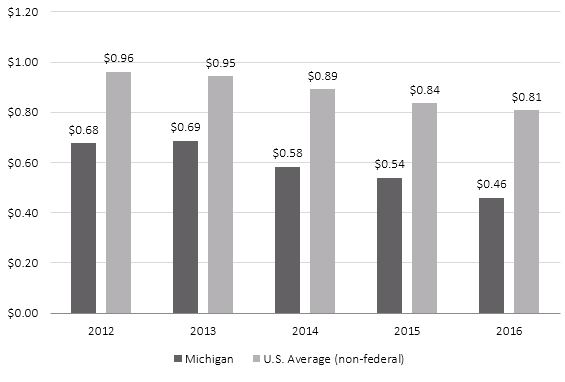 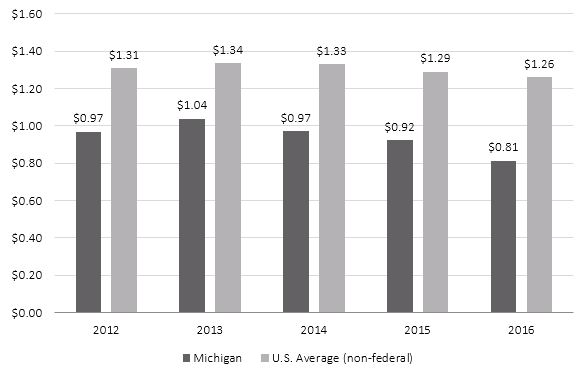