The Academy’s report, Workers’ Compensation: Benefits, Costs, and Coverage, also highlights five-year changes in workers’ compensation costs from 2012 to 2016. While New York followed national cost trends in the first few years of the period, since 2014 the state has diverged from the country, seeing costs as a share of payroll increase in 2015 and 2016 (Figure 1). By 2016, workers’ compensation costs to New York employers were $0.24 higher per $100 of covered payroll than the national average.

Between 2012 and 2016, the average cost of lost-time claims in New York increased faster than the state’s average weekly wage (New York State Insurance Rating Board, 2016 State of the System Report). “Lost-time claims account for the vast majority of workers’ compensation costs in any state,” said Marjorie Baldwin, Professor of Economics at Arizona State University. “The increasing severity of lost-time claims in New York was likely a major factor contributing to the increase in workers’ compensation costs over the period.”

New York was also one of only ten states in 2016 to experience an increase in workers’ compensation benefits paid as a share of covered payroll. Benefits paid to injured workers and their health care providers increased by 2.1 percent in New York, or $0.02 per $100 of covered payroll. In contrast, the U.S. as a whole saw benefits as a share of payroll decrease by an average of 3.6 percent, or $0.03 per $100 of payroll.

“New York has transformed workers’ compensation for the better in recent years,” said a spokeswoman for the New York State Workers’ Compensation Board. “Insurance premiums were cut 11.7 percent in 2018 and 4.5 percent the year before. Along with the rate decrease, 90 percent of first benefits are now paid within legal timeframes and 82 percent of injury reports are received on time, so employers now see vastly improved insurer performance, too.” 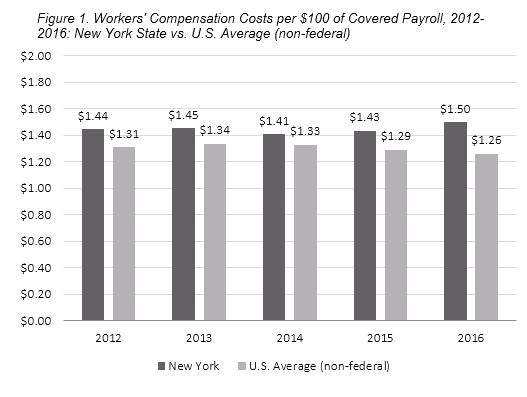 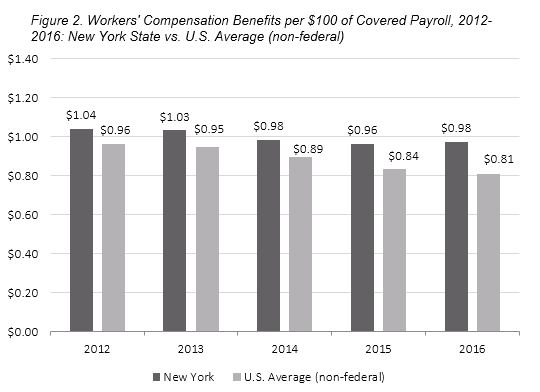