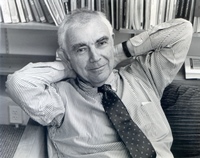 Rashi Fein was born in the Bronx, New York, and grew up in a number of cities in the U.S. and Canada. He served in the U.S. Navy during World War II and received his Bachelor’s and PhD degrees from Johns Hopkins University in Mathematics (1948) and Economics (1956), respectively.

For more than a half-century, from positions in the public, private, and academic sectors, Professor Fein was a prominent participant in the effort to bring about a fair and equitable program of universal national health insurance for all Americans, regardless of their need or status, economic or otherwise. He played a significant role in the development of the Medicare and Medicaid programs and was gratified to have witnessed the enactment and implementation of the Affordable Care Act (ACA), which he recognized as an incomplete compromise called for by the political climate and temper of the times. Throughout, however, he firmly believed that the best way to meet the goal of making comprehensive health care coverage available to all Americans would be through a single payer program. In that important respect, Professor Fein was unquestionably a lifelong advocate for the social insurance model.

Professor Fein’s work as an economist in the health care arena began in the early 1950s when he served on the staff of the Commission on the Health Needs of the Nation, a body convened by President Truman to consider the question of national health insurance for the United States. Later in that decade, he directed the economics task force for a study of the Economics of Mental Illness conducted under the auspices of the Joint Commission on Mental Illness and Health. During this period, he was also a member of the economics faculty at the University of North Carolina at Chapel Hill.

In 1961, Professor Fein moved to Washington, DC, to become a senior staff member with President Kennedy’s Council of Economic Advisers, a position he held until 1963 when he was appointed a senior fellow in the Economics Studies Program at The Brookings Institution. During his time at Brookings, he also was a member of the Johnson Administration’s presidential task force on health where he was able to observe and be involved in the development of the Medicare and Medicaid programs enacted in 1965.

In April 1968, then-acting HEW Secretary Wilbur Cohen appointed Professor Fein as the first chair of the Medical Assistance (Medicaid) Advisory Committee (MAAC), a 21-member Council that had been established under the 1967 amendments to Titles XVIII and XIX of the Social Security Act. The MAAC’s mission was to advise the HEW Secretary on matters of general policy and recommend improvements concerning the administration of Title XIX, including attention to the relationships between Medicaid and Medicare. As he would later note, his experience as chair of the MAAC highlighted the stark contrast between the welfare principles governing Medicaid and the social insurance concepts underpinning Medicare. Those differences and their consequences for those to be served by the two programs reinforced his belief in the social insurance model as the most equitable and serviceable means for meeting the health care needs of the American people.

In 1968, Professor Fein accepted an appointment as Professor of the Economics of Medicine at Harvard Medical School, a post he held until he became Emeritus in 1999. His years at Harvard were extremely productive and afforded him the opportunity to write and conduct research, as well as teach and mentor students at the Harvard Schools of Medicine and Public Health, the Department of Economics, the Kennedy School of Government, and other universities locally and nationwide. He also was an assistant director of the Harvard Center for Community Health and Medical Care, one of the first health services research centers funded by the federal agency known today as the Agency for Healthcare Research and Quality (AHRQ).

The movement to establish a program of universal health insurance in the United States remained a central focus of Professor Fein’s time and work at Harvard. Beginning in the 1970s, he served as a Board member and, for many years, chaired the Technical Committee of the Committee for National Health Insurance (CNHI).  With its origins in the United Auto Workers (UAW), CNHI had close ties to the labor movement. CNHI advocated a tax-based social insurance approach to national health insurance, one that today would be called “single payer” or “Medicare for All.” During its existence, CNHI formulated or took part in the development of numerous proposals for national health insurance.  As in all of his pursuits, Professor Fein’s contributions to the work of CNHI benefited substantially from the experience and observations gathered during his work in the early days of Medicare and Medicaid. However, in what was to be his last written work, Professor Fein noted that over time the political climate made compromise necessary so that later CNHI proposals, while still rooted in the social insurance model, of necessity incorporated accommodations to political realities.

In addition to having been a founding member of the Academy, Professor Fein was a charter member of the National Academy of Sciences’ Institute of Medicine, having also been a member of its predecessor, The National Academy of Sciences’ Board on Medicine. He served as a board member, consultant, and adviser to a variety of other public and non-profit agencies and institutions, as well as many organizations in his community. Over the course of his career, his work and contributions were widely recognized, and he was the recipient of numerous awards and honors.

Professor Fein left a rich legacy in the books and articles he published over more than half a century on a wide variety of subjects, but especially on the quest for, and the importance of, a social insurance model-based program of universal health care coverage in the United States.

Perhaps the richest and most enduring parts of Professor Fein’s legacy, however, are to be found in the generations of young people, students and others whose lives he touched, whose thinking he influenced, and whose values he helped shape through his teaching and mentoring. His opportunities to do so were many – from the courses and classes he taught at Harvard and other universities, to his work with the Fellows at the Harvard Center for Community Health and Medical Care, his service on the National Advisory Committee of the Robert Wood Johnson Foundation (RWJF) Clinical Scholars Program, his participation as a member of the Academy’s selection committee for the John Heinz Dissertation Award, and his tenure as chair of the National Advisory Committee (NAC) of the RWJF Scholars in Health Policy Research Program.

Although educated in economics, Professor Fein challenged people to think broadly about the underlying causes of problems and how best to work towards meaningful and viable solutions.  He pushed people – students and colleagues – to think not just about the efficiency implications, but also the equity implications of their work and to understand that to do this well would typically require insights from many disciplines. The work, moreover, was not done when the manuscript was published—it would need continuing effort to translate it into policy and practice. His decades-long efforts for universal health care coverage exemplified that commitment.

Professor Fein’s students often went on to become colleagues and good friends, and many of them have made substantial contributions to their fields, mindful of the lessons they learned from their professor and mentor and attuned to the sense of equity and the social values he passed on to them. Those lessons and values, first learned from his parents, guided Professor Fein’s life and informed his teaching, research, and writings throughout his professional career and personal life. In truth, there can be no finer legacy for a man committed to so worthy a cause and to the education of succeeding generations who are well equipped to carry on his work.

Professor Fein’s work, his values, and aspirations for a more equitable society are alive in those whose lives he touched, whose values he shaped, and in whose education he took part. In establishing the Rashi Fein Internship in Health Policy, the Academy recognizes and honors the long, productive career and the substantial accomplishments and contributions of Professor Fein.