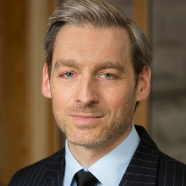 (Click here to see highlights from the virtual award ceremony on October 13, 2020, including Jacob’s acceptance speech.)

One of the most innovative voices in the contemporary discourse on American social policy, Jacob S. Hacker, Ph.D., is Director of the Institution for Social and Policy Studies, and Stanley B. Resor Professor of Political Science, at Yale University. As American voters and leaders continue to grapple with how we as a society provide access to affordable, high-quality health coverage and care, while also constraining health care spending, Professor Hacker is recognized for his profoundly influential research and writings on health policy, especially his development of the “public option.”

Hacker is an expert on the politics of U.S. health and social policy, as well as a regular media commentator and policy adviser. He has authored or co-authored six books, numerous journal articles, and a wide range of popular writings on American politics and public policy. In 2007, he authored a proposal for universal health care reform, “Health Care for America,” that shaped the national debate over reform. He edited Health At Risk: America’s Ailing Health System—and How to Heal It (2008).

Hacker’s impact goes beyond health policy. He wrote, with Paul Pierson, a New York Times bestseller – Winner-Take-All Politics: How Washington Made the Rich Richer and Turned Its Back on the Middle Class (2010). He is the author of American Amnesia: How the War on Government Led Us to Forget What Made America Prosper (2016), also written with Paul Pierson, which was a New York Times Book Review Editor’s Choice and a best business book of 2016, according to the management magazine Strategy+Business. Hacker and Pierson’s latest book (coming out in May 2020), Let Them Eat Tweets: How the Right Rules in an Age of Extreme Inequality, “addresses the question of how right-wing Republicans have gained and maintained their power despite the fact that their policies result in extreme – and increasing – economic and social inequality” (Booklist review).

An undisputable thought leader in social insurance and social policy overall, Hacker’s other books include: The Great Risk Shift: The New Economic Insecurity and the Decline of the American Dream (2006); The Divided Welfare State: The Battle over Public and Private Social Benefits in the United States (2002); and The Road to Nowhere: The Genesis of President Clinton’s Plan for Health Security (1997), co-winner of the Brownlow Book Award of the National Academy of Public Administration. He is also co-author, with Paul Pierson, of Off Center: The Republican Revolution and the Erosion of American Democracy (2005). He edited Shared Responsibility, Shared Risk: Government, Markets, and Social Policy in the Twenty-First Century (2012), with Ann O’ Leary. A prolific writer, Hacker is widely published in scholarly journals, including the American Political Science Review, the British Journal of Political Science, and Perspectives on Politics, as well as in popular outlets, such as the New York Times Magazine, The New Republic, and The Washington Post.

A Member of the Board of the National Academy of Social Insurance from 2005 to 2013, Hacker currently serves on the boards of The Century Foundation, Economic Policy Institute, and The American Prospect. He is an elected member of the American Academy of Arts and Sciences, a member of the Scholars Strategy Network steering committee, and a former Junior Fellow of the Harvard Society of Fellows. He is also a member of the OECD’s High-Level Expert Group on the Measurement of Economic Performance and Social Progress.

“Professor Hacker has lifted the visibility of issues of equity in designing social insurance programs, and the role they can play to mitigate risks and underlying inequalities by race, gender and class,” said William Spriggs, Chief Economist at the AFL-CIO and recipient of the 2016 Ball Award. “His contributions reach beyond the American context, and speak to the larger fallout of the neoliberal over-reliance on market forces that has caused the global spread of inequality among advanced economies.”

In the second edition of his book, The Great Risk Shift, Hacker writes:

“I hope that the facts and ideas in this book will help spark a broad debate about how we as a nation should deal with the pressing economic risks of the twenty first century. Today, Americans feel a loss of control over the circumstances that govern and shape their lives, and they are turning inward as a result, taking to heart the clear message of recent trends that they are on their own in the insecure new world of work and family. This is a threat to our nation’s future, and to the vision of America that generations of Americans have held dear.”

A member of the National Academy of Social Insurance since 2004, Hacker most recently served on the Academy’s Medicare Eligibility Study Panel, which issued its report, Examining Approaches to Expand Medicare Eligibility: Key Design Options and Implications, in March 2020. Hacker co-chaired the Academy’s 2007 conference, “For the Common Good: What Role for Social Insurance?”