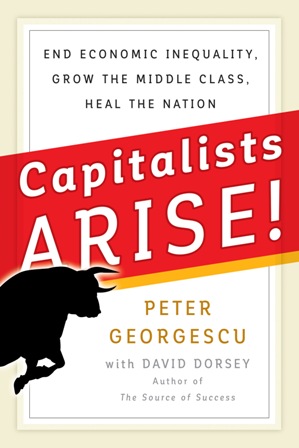 Join the National Academy of Social Insurance and the Bipartisan Policy Center as we co-host Peter Georgescu, former CEO of Young & Rubicam, to discuss his new book, Capitalists Arise!.

This discussion forum is part of the Academy’s national event series to improve our understanding of the nation’s social insurance programs and how they are addressing – and could better address – the challenges posed by growing inequality.

Capitalists Arise! (published on May 1, 2017) is based on Mr. Georgescu’s 2015 op-ed in the New York Times about why we need to deal with income inequality. Mr. Georgescu was also the opening keynote speaker at the Academy’s 2017 conference, which centered on our Report to the New Leadership and the American People on Social Insurance and Inequality.

The Bipartisan Policy Center is a non-profit organization that combines the best ideas from both parties to promote health, security, and opportunity for all Americans. BPC drives principled and politically viable policy solutions through the power of rigorous analysis, painstaking negotiation, and aggressive advocacy.

Since its inception 30 years ago, the Academy has hosted convenings that have offered visionary insights and rigorous inquiry into the functioning of our nation’s social insurance programs and how they can continue to meet the changing needs of American families, employees, and employers. Participants leave Academy events with valuable takeaways, including the latest research findings in the various fields of social insurance, who’s who in the field, and which organizations are most engaged in these issues.