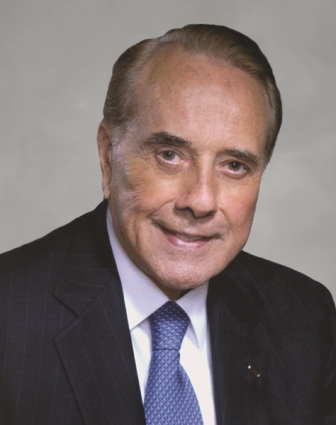 In 1983, Senator Dole was Chair of the Senate Finance Committee and served on the Greenspan Commission. In an interview at the 25th anniversary of the Academy, Senator Dole noted that he and Senator Daniel Moynihan agreed — “We can’t let this Commission fail.” He singled out the work of “the two Bobs – Bob Myers and the real leader, Bob Ball,” in helping the Commission reach an agreement that led to the Social Security Amendments of 1983.

Senator Dole and Senator Moynihan prevented a crisis in Social Security by coming together for one of the most meaningful bipartisan agreements in recent U.S. history. The Greenspan Commission’s reforms preserved the system’s solvency for the 30 million Americans relying on Social Security in 1983 and for future retirees. Nancy Altman, a Founding Board Member of the Academy and one of the 30th Anniversary honorees, also worked on the Greenspan Commission as Alan Greenspan’s assistant.

In 1988, shortly after the Academy began its operations, Senator Dole, who was ranking minority member of the Subcommittee on Social Security and Family Policy of the Senate Finance Committee at the time, again joined with Senator Moynihan, then Chairman of the Subcommittee. They asked the newly-formed Academy to conduct an in-depth study of the Social Security benefit “notch” question. This was one of the first publications of the Academy and helped to inform the 1992 bipartisan congressional Commission on the Social Security “Notch” Issue.

When Senator Dole accepted the Republican nomination for President in 1996, he told convention delegates:

“…And I have learned in my own life, from my own experience, that not every man, woman or child can make it on their own. And that in time of need, the bridge between failure and success can be the government itself. And given all that I have experienced, I shall always remember those in need.”

During his 1996 convention speech, Senator Dole also reiterated the need to preserve, strengthen, and protect Medicare. In 2015, the Medicare & Medicaid programs reached their 50th anniversary.

“For decades, Senator Dole was an influential leader in framing the political debate on our nation’s vital social insurance programs, producing years of bipartisan consensus that Social Security and Medicare were to be supported and maintained, not attacked and dismantled,” said Earl Pomeroy, an Academy Member and former member of the U.S. House of Representatives. “He sought to understand how the economic circumstances of families in Kansas and across the country were dramatically improved by the protections provided.”

In addition to being the Republican Presidential nominee in 1996, Senator Dole was the Republican Vice Presidential nominee in 1976. He represented Kansas in the U.S. Senate from 1969-1996, serving part of that time as Senate Majority Leader. He continues to hold the record as the longest-serving Republican leader. He is married to former Cabinet Member and former U.S. Senator Elizabeth Hanford Dole of North Carolina.

Senator Bob Dole continues his efforts to increase support for and secure congressional passage of the Convention on Rights of Persons with Disabilities. He serves as special counsel at the law firm of Alston & Bird and is also one of the co-founders of the Bipartisan Policy Center.

“Throughout his nearly 36 years in Congress, Senator Dole worked across the aisle on a number of issues,” said Bill Hoagland, Academy Board Member and Senior Vice President at the Bipartisan Policy Center. “He was an early champion of the Americans with Disabilities Act and continues to speak on issues involving our nation’s veterans and health care. His life, his military service and career remind us of what it means to be a statesman and a dedicated public servant. I am proud to call him my friend.”

“On behalf of the Academy’s Board of Directors, as part of our 30th anniversary celebration, I am delighted to recognize the Senator’s bipartisan efforts to support our nation’s social insurance programs and related social protections,” said Bill Rodgers, Chair of the Academy’s Board of Directors and Professor of Public Policy at the Edward J. Bloustein School of Planning and Public Policy at Rutgers University. “It’s a personal treat because ever since meeting Senator Dole when I was a high school intern for Senator Moynihan, I have always admired the Senator for his leadership.”

At the June 7th celebration, the National Academy of Social Insurance will be honoring eight Founding Board Members of the organization as they pass the torch to a new generation of social insurance leaders.

When the National Academy of Social Insurance began operating 30 years ago, Robert M. Ball and the other founders saw a policy environment filled with misinformation and confusion. They sought to form an organization that would help educate the public, develop new leaders, and conduct research and policy analyses. The Academy’s commitment to bipartisanship was further solidified with the formation of a four-person Board of Advisors: Senator Moynihan, Senator John Heinz, Lane Kirkland (AFL-CIO), and Alexander Trowbridge (National Association of Manufacturers).

Thanks to early support from Senator Dole, Senator Edward Kennedy, and other distinguished national leaders, the Academy grew from a handful of founders to become a community for over 1,000 of the nation’s top experts on social insurance. Over the past three decades, the Academy has been a nonpartisan source of knowledge about our nation’s programs – from Social Security, Medicare and Medicaid, to unemployment insurance and workers’ compensation.

Today, the Academy remains committed to advancing our knowledge and promoting a robust and constructive exchange of ideas – because our leaders cannot afford to overlook or misunderstand the indispensable role of social insurance in a thriving American society.