WASHINGTON, D.C. – In Illinois, workers’ compensation benefits paid dropped sharply in recent years compared to the rest of the U.S., according to a new report from the National Academy of Social Insurance (the Academy).

“Illinois reduced its medical fee schedule by 30 percent, established a preferred provider program, and introduced a number of other changes to its medical system in 2011 that are likely influencing the decline in medical benefits paid,” said Christopher McLaren, Senior Researcher at the Academy and lead author of the report.  “There were also legislative changes to statutory benefit levels and disability rating standards that explain some of the trends in cash benefits paid in the state.”

Illinois also experienced slower growth in employer costs for workers’ compensation relative to other states. Between 2011 and 2015, costs in Illinois increased 3.8 percent, well below the 21.6 percent increase in costs that occurred in the rest of the U.S.

Table 1. Workers’ Compensation Benefits, Coverage, and Costs:
Illinois and the Rest of the U.S.

Other findings on workers’ compensation in Illinois from the Academy’s report include: 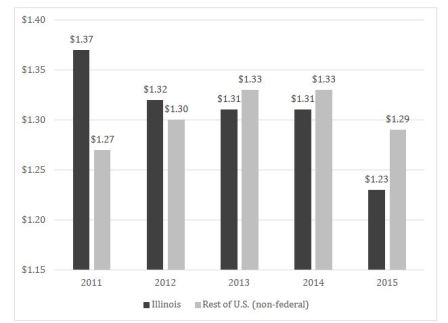