WASHINGTON, D.C. – Total workers’ compensation benefits paid and costs to employers in Oklahoma declined sharply in recent years compared to the rest of the U.S., according to a new report from the National Academy of Social Insurance (the Academy).

“Oklahoma implemented a number of significant changes to its workers’ compensation system in 2014 under Senate Bill 1062,” said Christopher McLaren, Senior Researcher at the Academy and lead author of the report. “The sharp declines experienced in total benefits paid and employer costs immediately after the bill was enacted suggest that it played a significant role in the trends occurring in Oklahoma.”

Oklahoma also experienced a significant decline in employer costs for workers’ compensation after the implementation of Senate Bill 1062. Between 2011 and 2013, costs in Oklahoma increased 15.2 percent, but between 2013 and 2015, costs fell 14.1 percent. Across the entire time period, costs in Oklahoma declined 1.0 percent, in sharp contrast to the 21.1 percent increase in costs that occurred in the rest of the U.S.

Table 1. Workers’ Compensation Benefits, Coverage, and Costs: Oklahoma and the Rest of the U.S. (non-federal)

Nevertheless, “the large decreases in total workers’ compensation benefits and costs in Oklahoma, relative to the rest of the U.S., do not appear to be explained by differential trends in employment and wages in Oklahoma,” said Marjorie Baldwin, Professor at Arizona State University and co-author of the report. “Between 2011 and 2015, workers’ compensation covered employment and wages in Oklahoma increased at rates close to the rates for the rest of the U.S.”

Other findings on workers’ compensation in Oklahoma from the Academy’s report include: 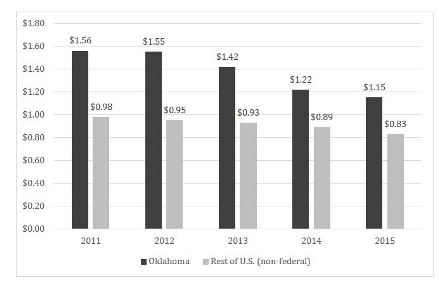 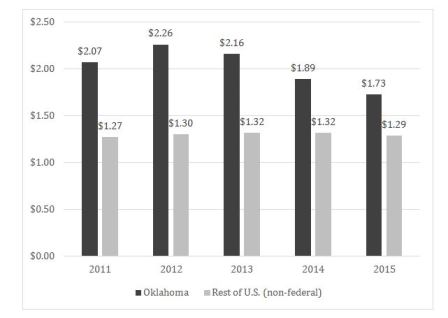 Workers’ Compensation: Benefits, Coverage, and Costs (2015 data) is the 20th in an annual series. The report provides the only comprehensive data on workers’ compensation benefits, coverage, and employer costs for the nation, the states, the District of Columbia, and federal programs.