WASHINGTON, D.C. – Total workers’ compensation benefits paid increased in Washington State between 2011 and 2015, but spending on medical benefits declined, according to a new report from the National Academy of Social Insurance (the Academy).

“Washington experienced significant growth in employment covered by workers’ compensation, so it is not surprising that total benefits paid increased faster than in the rest of the nation,” said Christopher McLaren, Senior Researcher at the Academy and lead author of the report. “However, what stands out about Washington is that its total spending on medical care has continued to gradually decline, and it has consistently had one of the lowest shares of medical benefits relative to total benefits paid across the country in recent years.”

Table 1. Workers’ Compensation Benefits, Coverage, and Costs: Washington and the Rest of the U.S.

“Between 2011 and 2015, both the employer and employee contribution to workers’ compensation in Washington declined, relative to covered payroll,” said Marjorie Baldwin, Professor at Arizona State University and co-author of the report. “However, the employer share declined at a more rapid pace—employer costs as a share of payroll fell 9 percent, while employee contributions fell 5 percent.  As a result, Washington workers paid a slightly higher proportion of total workers’ compensation costs in 2015 (22 percent) than they did in 2011 (21 percent).”  (See Figure 2).

Other findings on workers’ compensation in Washington from the Academy’s report include: 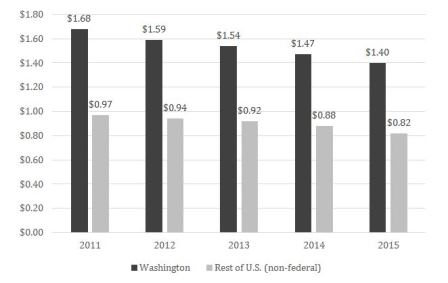 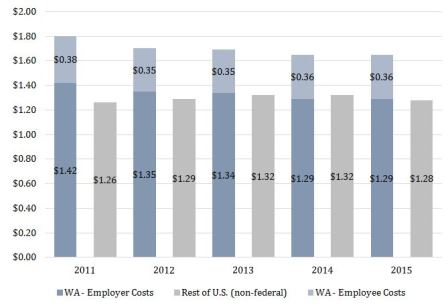