WASHINGTON, D.C. – Workers’ compensation benefits paid and employer costs dropped sharply in West Virginia in recent years, according to a new report from the National Academy of Social Insurance (the Academy).

In West Virginia, there were large percentage decreases in both medical and cash benefits paid between 2011 and 2015. Cash benefits declined by 23.5 percent and medical spending by 17.5 percent. The reductions continue a downward trend that began when the state changed from an exclusive state fund to a private carrier system in 2008, along with substantial reductions in the statutory levels of benefits.

“Despite the sharp decline in total workers’ compensation benefits paid in West Virginia between 2011 and 2015, benefits per $100 covered wages were still nearly twice as high in West Virginia as in the rest of the U.S. as a whole,” said Marjorie Baldwin, Professor at Arizona State University and co-author of the report (See Figure 1 below).

Table 1. Workers’ Compensation Benefits, Coverage, and Costs: West Virginia and the Rest of the U.S. (non-federal)

“West Virginia has gone through a number of workers’ compensation legislative changes in the past decade or so that will influence benefits paid and employer costs,” said Christopher McLaren, Senior Researcher at the Academy and lead author of the report. “However, another big factor is West Virginia’s slow economic recovery after the Great Recession. West Virginia’s covered employment levels declined each year from 2012 to 2015, whereas employment is growing in the rest of the nation.”

Other findings on workers’ compensation in West Virginia from the Academy report include: 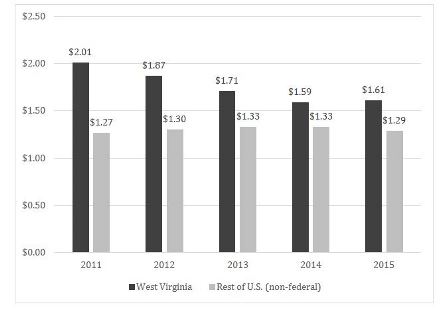