Designing Universal Long-Term Services and Supports Programs: Lessons from Germany and Other Countries

In 2019, Washington State enacted the first universal long-term services and supports (LTSS) program in the United States. It is a social insurance program, like Social Security or Medicare Hospital Insurance, into which virtually all workers contribute and from which all who meet the vesting requirements will be eligible to benefit. Several other states are considering adopting similar programs in the coming years. While universal LTSS programs are new to the United States, a number of other countries have experience with such programs, and most of these countries have been operating them for decades. As state governments in the U.S. embark on the design and implementation of universal LTSS programs, much can be learned from the experience of existing programs in Europe and Asia. For social insurance approaches to LTSS, Germany’s program is the paradigmatic model internationally due to its modest fiscal footprint and robust benefit structure. Despite being contributory, it achieved near-universal coverage within a few years of implementation primarily by having a low vesting threshold, employing an expansive definition of vesting to include non-contributing family members, and leveraging a pay-as-you-go financing approach (together with the low vesting threshold) to cover those who were already retired at the time of enactment. It offers those needing care flexible benefits that constitute a range of choices including formal care, family care, or some combination of the two. Most fundamentally, it has made LTSS universally accessible and affordable by people of all ages needing LTSS.

This brief begins with an overview of the range of existing approaches abroad to the provision of universal LTSS, and then considers lessons from an in-depth case study of the German program.

Hosted by the National Academy of Social Insurance, this webinar included an overview of the range of existing international approaches to the provision of universal LTSS and the key role of workforce policy in designing effective programs. Panelists discussed the implications for policy reform happening at the state level in the U.S. 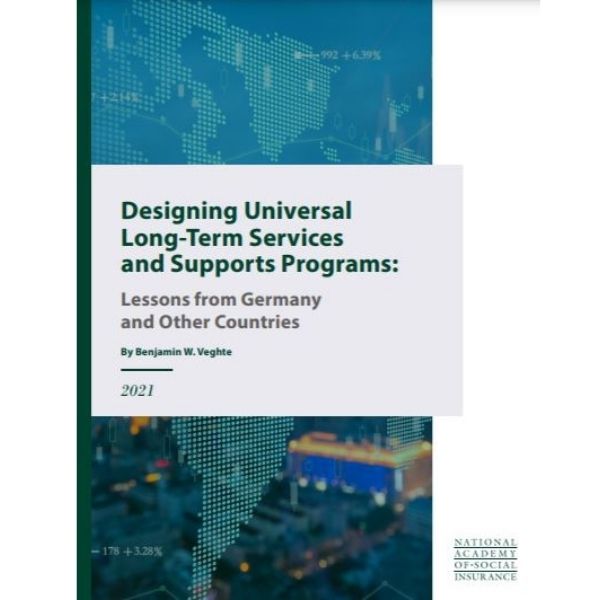