Workers’ compensation insures millions of workers and their families against the risks associated with lost wages and medical costs in the event of injury on the job, workrelated illness and, in extreme cases, the death of a worker. It is the only social insurance system run almost entirely by states, with no federal guidelines. Despite being a core component of the U.S. social insurance ecosystem, workers’ compensation often receives less attention than other SI programs, like Social Security and Medicare, in part because it has no federal aspect.

To fill part of this gap, the National Academy of Social Insurance produces an annual report on state and federal workers’ compensation program benefits, costs, and coverage. This latest report, the 23rd in our series, provides new data for 2018, with comparison data for the five-year period from 2014 to 2018.

Workers’ compensation is the oldest social insurance program in the U.S. The first states to pass workers’ compensation laws did so in the 1910s. At that time, the many workers who were injured on the job, often badly, rarely received any compensation. Suing employers was costly, and employers could invoke legal defenses that defeated workers’ arguments in the majority of cases. At the same time, employers faced potentially heavy liability, because it was very difficult to predict how much employees would be awarded when they did win such suits. The laws that states enacted in response to this situation are sometimes referred to as the “Grand Bargain” due to the combination of benefits for and compromises made by each of these parties. While initial laws covered only more serious injuries in specific occupations, they have evolved over the past century to cover the vast majority of workers and work-related injuries and illnesses.

State workers’ compensation systems provide compensation for lost wages and medical care for injured or ill workers, regardless of negligence. States regulate laws such that certain injury types and varying levels of disability result in wage-replacement payments aimed to correspond with the severity of the injury and its associated costs. Workers who are covered cannot sue, nor can they recover for pain and suffering or other costs beyond wages and medical care. Employers whose workers are covered must purchase workers’ compensation insurance from private providers or state funds.2 All states but North Dakota and Wyoming also allow employers with the capacity to do so to self-insure.

Moreover, as the full report documents, these trends represent the continuation of longer-term declines in employer costs and worker benefits. While coverage has increased fairly steadily over the past two decades, employer costs have fallen from $1.42 per $100 of covered wages in 1998 to $1.21 in 2018. Worker benefits decreased even more, from $1.13 twenty years ago to $0.77 per $100 of covered wages. 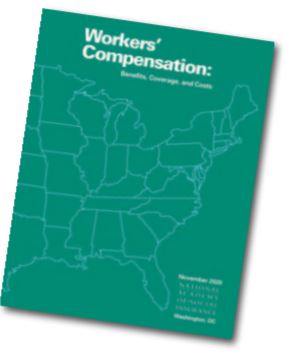