This Workers’ Compensation Issue Spotlight explains how the federal Black Lung Program provides benefits to workers with a variety of debilitating lung conditions resulting from work in coal mines. The Program is currently deeply in debt, and the proportion of miners developing black lung disease has increased over the past 25 years. This explores the forces driving increases in rates of black lung, why benefits are declining, and the Program’s financial challenges.

If black lung cases increase in the future, the fiscal situation will continue to deteriorate. Although coal miners will most likely continue to receive benefits, the Program will probably need another federal bailout. 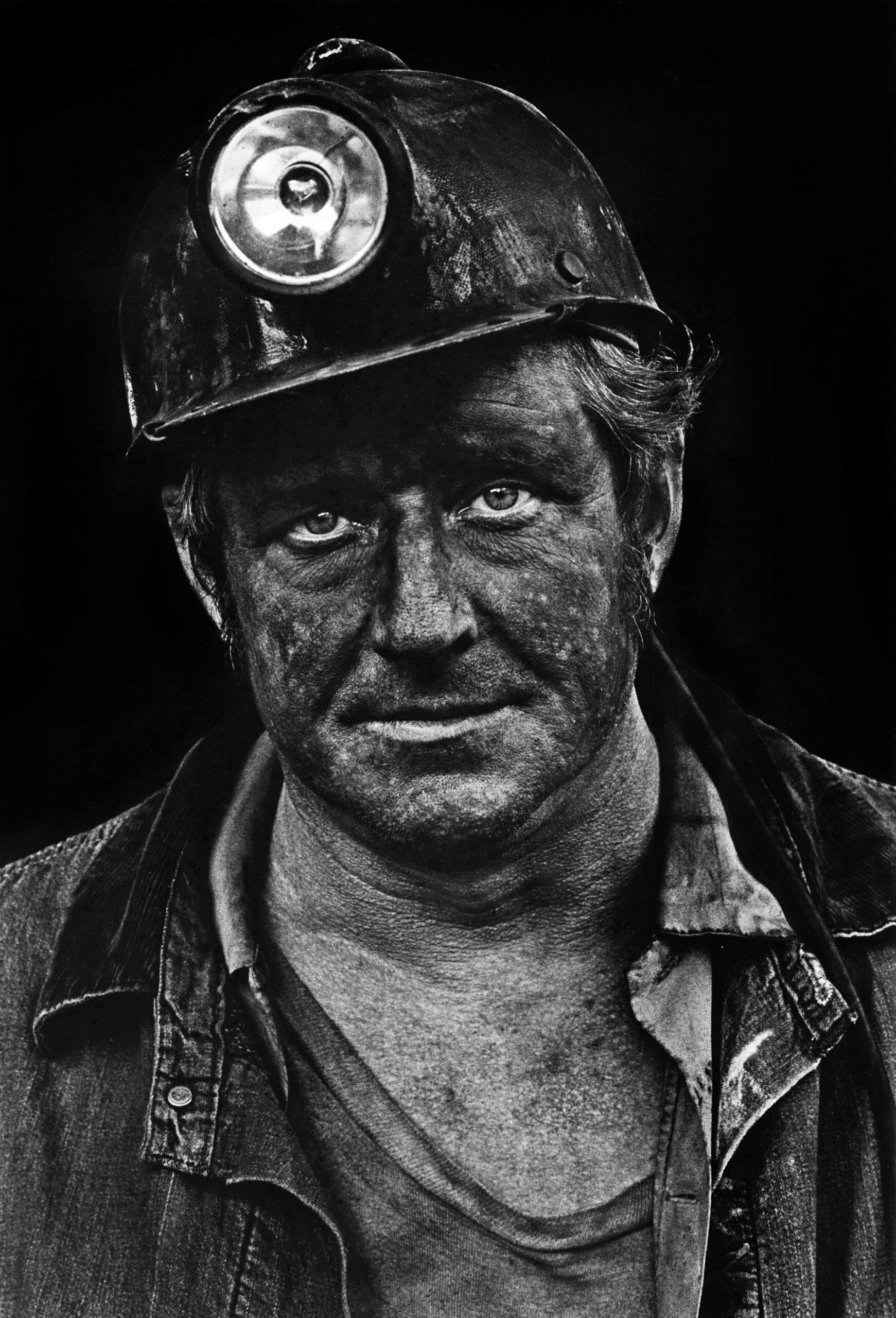 Black lung is a term encompassing a variety of lung diseases caused by exposure to coal mine dust, including coal workers pneumoconiosis (CWP), silicosis, emphysema, and chronic obstructive pulmonary disease. These progressive diseases often continue to get worse for many years after exposure has ended. In its advanced stages – progressive massive fibrosis (PMF) or advanced emphysema – black lung is totally disabling and often fatal. Even breathing is hard. NPR quoted Mackie Brangham, only 39 years old but with black lung so bad that – “The more I talk, the more I get out of breath. It’s like I ain’t got no capacity” (Berkes, 2016).

From 1977-2016, the Mine Safety and Health Administration (MSHA) standard for respirable coal mine dust was 2.0 milligrams of respirable dust per cubic meter of air (mg/m3). A 2014 rule lowered the standard to 1.5 mg/m3, effective January 1, 2016. Many hoped the standards would virtually eliminate black lung. They did not. Rather, although the proportion of miners developing black lung declined substantially between 1975 and the late 1990s, it then started to increase, especially in West Virginia, Virginia, and Kentucky (Blackley et al., 2018). In those states, researchers from the National Institute for Occupational Safety and Health (NIOSH) estimate that, as of 2017, one in five underground miners with at least 25 years of experience have CWP, and 1 in 20 have PMF. Moreover, a recent report suggests that these numbers underestimate the number of miners with PMF, which is now frequently diagnosed among miners with less than 25 years of experience (Almberg et al., 2018). 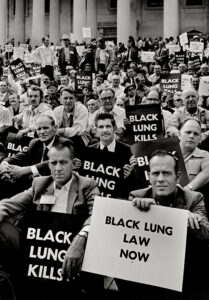 How can exposures be increasing substantially in the face of stringent exposure standards?

Given that black lung is caused by exposure to coal-mine dust, the increased prevalence implies increased exposure. One possible reason for this is that, in recent years, underground mines have been mining coal faster and drawing it from increasingly thinner seams. As a result, ever more powerful mining machines have been cutting into rock with a high silica content, generating more dust. Silica dust causes irreversible lung damage and is even more harmful to the lungs than coal dust, so increased silica exposure may have contributed to the rise in disease (Cohen et al., 2016).

Another possible explanation is that miners have been working much longer hours, increasing their exposure to coal-mine dust.

A third explanation points to the Mine Safety and Health Administration (MSHA) program that monitors coal-mine dust to ensure that it is kept within the standard. The agency requires coal-mine operators to take samples of the air that coal miners breathe and send them to MSHA for analysis, to ensure that the level stays below the permissible exposure limit. There is evidence, however, that some operators have provided MSHA with unrepresentative samples that were collected in locations with known low dust levels, during times of unusually low production, or when dust controls are functioning optimally (Boden & Gold, 1984, and Weeks, 2003). This has prevented MSHA from identifying exposures above the legal limit and from penalizing the mine owners who are responsible. As a result, these illegal and harmful exposures have gone unchecked.

Moreover, MSHA’s regulation of silica exposure has been insufficient to prevent miners from getting sick. As early as 1995, NIOSH recommended exposure limits of 1 mg/m3 for coal mine dust and a separate limit of 0.05 mg/m3 for silica dust (NIOSH, 1995). A 2020 report produced by the Department of Labor’s Office of the Inspector General pointed out that MSHA still does not have a separate silica exposure limit (OIG, 2020). Instead, its silica limit is part of its coal mine dust standard. As a result, if silica levels are high but the overall standard is not violated, MSHA cannot cite or fine mine owners.

The increase in black lung highlights the continued need for a federal program that compensates miners who are disabled by or who die from this disease and their surviving family members. It also shines a light on the Program’s persistent challenges and weaknesses and the need for further research to understand why exposures are increasing.

Congress enacted the Black Lung Benefits Act (the Act) as part of the Coal Mine Health and Safety Act of 1969, in response to a lack of adequate coverage for the disease from state workers’ compensation programs. The Act provides monthly compensation and medical treatment benefits to coal miners who are totally disabled from black lung, as well as compensation to eligible survivors of those it kills. Liability for compensation generally rests with the miner’s coal-mine employers or their insurance carriers. However, if a self-insured employer becomes bankrupt or goes out of business, the Federal Black Lung Program, which also administers the Act, pays any benefits due. Since 1970, the Program has paid over forty-seven billion dollars of cash and medical benefits, and at the end of fiscal year 2021, there were over 30,000 individuals receiving benefits, including miners and their survivors and eligible dependents (OWCP, 2021).

Black lung rates are on the rise, so why are benefit payments declining?

Many of the miners who enrolled in the early years of the program and their survivors have died. And employment in coal mining, particularly underground coal mining, has declined substantially in recent decades – 170,000 people worked in the industry in 1985, down to 74,000 (less than 44% of that number) in 2000, and just 47,000 in 2020, according to the Bureau of Labor Statistics (BLS, 2021).

Both trends reduce benefit payouts, but the decline in employment has been largely offset by the increase in the prevalence of black lung among current and former miners. As a result, benefit payments have only declined slightly. Moreover, the decline in cases may not continue. Indeed, if the proportion of current and former miners developing disabling black lung continues to increase, case numbers may rise.

In addition, mine operators frequently contest claims for black lung benefits, causing long delays, with many miners dying before their cases ae resolved. There is, however, no evidence that owners are contesting cases more or less frequently now than they did in the 1990s, so it is not clear how that issue might affect declines in benefit payments.

Why are interest payments and deferred costs so large, and why have they been rising?

The Black Lung Program compensation system was designed so that benefits would come primarily from a per-ton tax on coal mined and sold in the U.S. If revenues fell short of benefit payments, the Program could receive repayable advances from the U.S. Treasury’s general fund.

The first blow to excise tax revenues came in 1998 with the Ranger Fuel Corp. v. U.S. decision (Ranger Fuel Corp. v. U.S., 1998). Before that decision, the coal excise tax was collected on all U.S.-mined coal when it was sold. However, the court decided that it was unconstitutional to levy the tax on exported coal. The court ordered that the Black Lung Program refund taxes that had been collected on exported coal and that future taxes be collected only on coal sold in the U.S. Congress did not increase the tax rate on U.S.-sold coal to make up the difference.

Coal taxes were inadequate to cover benefit payments during the 1990s and early 2000s, when the Black Lung Program incurred a debt to the Treasury of over $10 billion. Congress forgave much of that debt in 2009, and it looked like the Program would be able to pay down the rest of its debt. However, although taxes on coal mining companies now cover current benefit costs, the Program’s debt continues to grow; it must thus continue to make interest and principal payments on its debt to the Treasury.

Compounding this challenge, Congress cut the black lung tax rate in half in 2019, which the U.S. Government Accountability Office estimates increased projected 2050 debt from $4.5 billion to $15.4 billion (GAO, 2018).

A string of coal company bankruptcies has added to the program’s fiscal woes. By law, these companies must either purchase insurance to cover their potential black-lung payments or self-insure. The Department of Labor’s Office of Workers’ Compensation Programs (OWCP) must approve requests to self-insure, which should be based on companies’ ability to cover all future black-lung benefit payments. However, the OWCP may not have given applications adequate scrutiny. In 2014-2019, the trust fund absorbed $310 million in black lung benefit liabilities from bankrupt coal companies that self-insured (GAO, 2019).

The history of the Federal Black Lung Program presents a cautionary tale about financing. It raises serious concerns about the Federal government’s commitment to having coal mine owners foot the bill for the consequences of exposing miners to high levels of coal mine dust. The Act creating the Program financed disbursements with a coal excise tax. However, that tax was inadequate to cover Program expenditures from the outset, and borrowing costs, combined with a court ruling that decreased the tax base and a 2019 excise tax rate cut, exacerbated the Program’s financial difficulties. Lax oversight of self-insurance, followed by substantial coal mining company bankruptcies, only made matters worse.

Coal miners in the United States are facing a resurgence of a disabling and often fatal disease – black lung. The 2014 MSHA rule not only tightened the standard for exposure to coal mine dust. It also improved the required coal mine dust sampling methods. These changes should, if successfully enforced, lead to better control of miner exposures and thereby reduced black lung disease. However, a separate silica exposure standard seems critical as well. Time will tell whether these changes reduce or, hopefully, eliminate black lung. Saving miners from this disabling and often fatal disease would be the ideal outcome. This would be by far the best way to resolve the financial issues bedeviling the Program.

Les Boden, author of this publication, is a Professor at Boston University School of Public Health and was Chair of the Academy’s Study Panel on Workers’ Compensation from 2018-2021. Thanks to Earl Dotter for the use of his exceptional photographs. The Academy gratefully acknowledges Chris Godfrey, Scott Laney, Eileen Storey, Greg Wagner, Jim Weeks, and Elaine Weiss for their contributions to this Spotlight. Of course, the content, including opinions and errors, are entirely the responsibility of the author.

The author of the publication would like to particularly credit Eileen Storey, MD, MPH, who helped him to understand black lung. Eileen was a remarkable public health physician who devoted her life to protecting the health of working people, including serving as Chief of the Surveillance Branch of the Respiratory Health Division at NIOSH from 2008-2017. Eileen passed away on September 26, 2021.