Like other social insurance programs – e.g., Social Security, Medicare, and Unemployment Insurance – workers’ compensation uses contributions from employers to provide support for workers when they need it.1 As the first social insurance program to be implemented in the United States, the first states adopted workers’ compensation in the early 1910s, when federal-level programs were not yet considered legally acceptable. Other states quickly followed suit, with 43 states having enacted workers’ compensation laws by 1920 and the last in 1948. The lack of a federal framework distinguishes it from the other SI programs.

In the century since, workers’ compensation has served as a critical protection for injured and ill workers and their families, providing medical care and, when appropriate, wage replacement benefits.2 It also pays funeral expenses and survivor benefits for those whose injuries result in death. The program has evolved to protect not only those injured at work, but also some workers who become ill due to workplace factors, though such “occupational diseases” have been less clearly and consistently covered.

The state-based nature of the system makes it difficult to measure the national-level impact of annual legislative and regulatory changes on employers and workers. This makes the National Academy of Social Insurance’s annual Report on Workers’ Compensation Benefits, Costs, and Coverage an important and unique resource.

Since 1996, the Academy has produced the nation’s only annual report providing data on workers’ compensation coverage of the U.S. labor force, the cost to employers of that coverage, and benefits paid to workers both at the national level and across states. These reports provide data updated to two years prior – in this case, the most recent data are from 2020 – and update the preceding four years (2016-19). In this report, the five-year “study period” is from 2016-2020, with 2020 notable as the first data year reflecting changes brought by the COVID-19 pandemic.

This executive summary highlights key findings and trends from the report.

Total benefits paid decreased between 2016 and 2020 from $62.7 billion to $58.9 billion due to a sharp decline in the first pandemic year, while standardized benefits3 continued declining, following a decade-long trend (Table 1).

Employer costs declined more than worker benefits over the study period on both a total basis—from $100.2 billion to $93.0 billion—and a standardized basis, sustaining a long-term trend (Table 1).

Covered jobs declined over the study period due to pandemic job losses, while covered wages continued to increase, albeit at a much slower rate in the first pandemic year (Table 1).

In recent decades, the portion of workers’ compensation benefits paid under deductible provisions has grown substantially, from 13.0% in 2000 to 18.0% in 2020 (Table 6).

Press release: Costs and benefits declined sharply in the first year of the pandemic, with significant variation across states 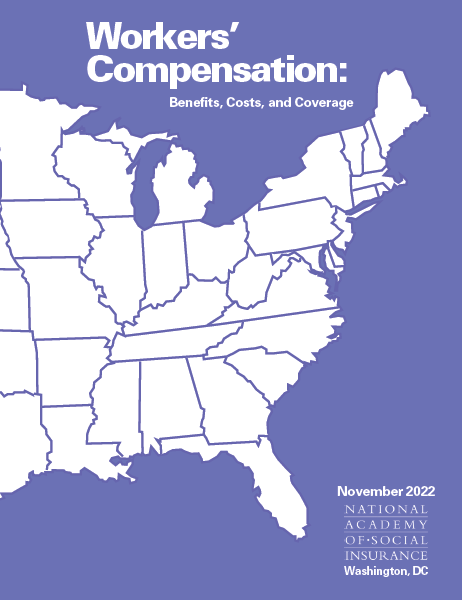