Robert M. Ball had every intention of living to 100, and he almost made it. Born on March 28, 1914, he was just two months shy of his 93rd birthday when he died in 2008. Until the very end he worked ceaselessly to promote the evolution of social insurance and to protect the programs he had administered and championed — notably Social Security and Medicare — against every attempt to weaken them. His name may have been unfamiliar to most of the Americans whose security he made his life’s work, but, as Senator Edward M. Kennedy said of him: “Few if any in the long history of our country have done so much for so many for so long.”

Bob Ball devoted his entire adult life to public service, which he saw as a high calling. Now, as we mark his centennial on March 28, how would he most want to be remembered?

He was a deep thinker, a brilliant administrator, and a patient and confident negotiator who took quiet pride in always being the best-informed person in the room. As he once wrote, describing the qualities of a successful Social Security administrator, “As a general principle, timidity is to be avoided.” He avoided it in style. The photo that accompanies this post shows Bob in his element — holding forth in the East Room of the White House in 1966, describing the flawless implementation of Medicare to a rapt audience. He was justifiably proud of his accomplishments, and of the remarkable men and women who served under him at the Social Security Administration — but what concerned him greatly was the urgent need to ensure that the programs he cared so much about would be preserved and improved by future generations of leaders.

That concern prompted him to found the National Academy of Social Insurance in 1986. As Treasury Secretary and NASI member Jack Lew said of him: “He was a role model for several generations of policymakers who learned from Bob what it means to be a great public servant.” It is as mentor — to many, many of NASI’s members and staff, past and present — that Bob would want to be remembered. And what would please him most would be the knowledge that the Academy he created is succeeding in its mission of leadership development.

Today, former NASI interns and staff members serve in key leadership roles in government, academia, business, advocacy organizations, and the media. And currently — continuing a 24-year tradition — NASI members and staff are in the process of selecting, from more than 100 applicants, 15 to 18 individuals who will serve 12-week internships this summer with social insurance-related policy projects in Washington, D.C.

Like their predecessors, this year’s interns will gain a deeper understanding of what NASI founding member Ted Marmor meant when he wrote that “humane societies require stable institutions of social insurance to soften the blows of capitalism’s harshest features” — and why the continued stability of these institutions can never be taken for granted. If past experience is a guide, many of this year’s interns will take that message to heart and pursue careers that serve the common good. (Indeed, two former interns — Kristine Quinio and Kristen Arnold — now serve on NASI’s staff.)

The National Academy of Social Insurance will honor Bob Ball’s 100th birthday and his vision with a new fund to support and sustain the Academy’s leadership development initiatives — including individual mentoring by NASI members and staff. (You can learn more about the memorial fund here.) As Bob Ball knew so well, there is no better way to invest in the future of social insurance than by identifying, educating, and encouraging tomorrow’s leaders. 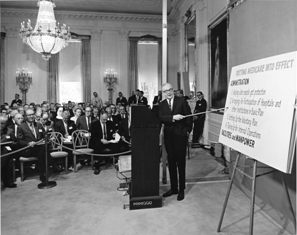