On Wednesday, August 1, dozens of summer interns and young professionals gathered at the 2018 Summer Social Security Academy in Washington, DC to engage in thoughtful discussion about the features and future of Social Security. Guided by actuaries from the Social Security Administration (SSA), participants explored policy options to address the adequacy of benefits and achieve long-term financial balance. For attendees, it was a brief glimpse into the frequent discussions that take place on Capitol Hill and in policy circles around the country. 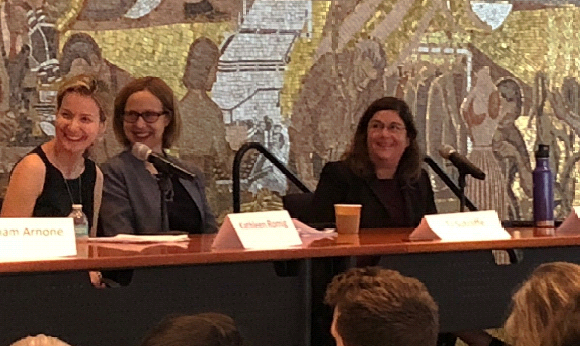 Participants were introduced to concepts in Social Security policy by a series of expert panels and speakers. The first panel, “Why is Social Security Important and How Does It Work?,” discussed who receives Social Security benefits and the importance of these benefits for recipients. Kathleen Romig, Senior Policy Analyst for the Center on Budget and Policy Priorities, kicked off the panel with her presentation, “Why Social Security Matters to You.” She emphasized Social Security’s role in poverty reduction, stating that the program lifted 1.5 million children out of poverty in 2016. Acknowledging her audience, Romig noted that younger workers are currently contributing to Social Security’s funds, and that many have already received benefits. TJ Sutcliffe of The Arc and Lisa Ekman of the National Organization of Social Security Claimants’ Representatives (NOSSCR) echoed these points in their discussions of Social Security Disability Insurance (DI). Like Romig, Sutcliffe remarked on the program’s role in decreasing poverty among people with disabilities, who are especially vulnerable to financial hardship. According to Sutcliffe, without DI, the poverty rate for people with disabilities would increase over thirty percentage points, from 19.7 percent to 50.5 percent. Ekman also highlighted the issue of chronic underfunding of the SSA, in addition to the increasingly difficult appeals process faced by DI applicants.

Chief Actuary Stephen Goss and Deputy Chief Actuary Karen Glenn of SSA presented in the second panel, “Social Security’s Financing and Policy Options.” Their presentations broke down how Social Security is funded, the current financial status of the trust funds, and the ramifications of the projected financing gap. The panel ended on an optimistic note, as Goss introduced policy options to address the adequacy of benefits and the financing gap.

After the panels concluded, participants discussed the pros and cons of various policy reform options in small groups. Each group was aided by one of the Social Security actuaries in attendance. Four policy areas received special attention: the retirement age, the taxable maximum, benefit changes for certain populations, and cost-of-living adjustments.

Supervisory Actuary Tiffany Bosley introduced the first discussion, on the retirement age, with a presentation on the implications of raising the full retirement age. In group discussions about this topic, participants weighed the impacts of raising the age on beneficiaries against the need to close the financing gap. Moving on to the next topic, Executive Officer and Supervisory Actuary Jason Schultz detailed the program’s contribution structure, which then informed small-group discussions about altering the cap on taxable income subject to Social Security contributions. Actuary Daniel Nickerson then presented on options to modify benefits—both broadly and for specific subgroups of beneficiaries. Of the options proposed, many groups found the arguments for establishing a caregiver credit and for extending children’s benefits through college to be most persuasive. The final policy area, changing the cost-of-living adjustment, was presented by Actuary Kyle Burkhalter. Groups weighed the pros and cons of adopting different cost-of-living adjustments, one of which may more accurately reflect the inflation experienced by the elderly, and another of which could more accurately reflect consumers’ ability to substitute different classes of goods for one another.

The day-long seminar culminated in a series of small group discussions, where participants made tradeoffs between different policy options to come up with a preferred set of changes to Social Security. Lively debate ensued over changes to the retirement age, the Social Security tax rate and base, benefits, and other elements of the program’s structure. While policy preferences were the primary topic, the political feasibility of various options was not forgotten. For example, although a few groups embraced the idea of raising the retirement age, most groups were skeptical of such proposals due to the anticipation of strong political opposition. In spite of disagreements, each group was able to compromise on a set of policy changes that came within five percent of closing the financing gap, and many groups ended with a budgetary surplus.

For a final word on Social Security, the Academy invited The Honorable Earl Pomeroy, a former Member of the House of Representatives, to the stage to discuss current developments in Social Security policy. Pomeroy began by describing the program’s role in reducing poverty and giving dignity to the elderly. In a tender moment, Pomeroy recalled his experiences conversing with constituents who relied on Social Security to meet their most basic needs. He proceeded to commend the day’s activities, expressing optimistic feelings about Social Security’s future based on the interest and passion shown during the group discussions. 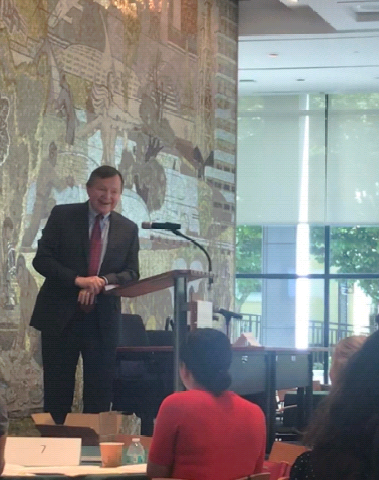 In light of the event, we want to continue the important discussion around Social Security’s financial future. What means to restoring solvency do you find most compelling and why? Are current Social Security benefit levels inadequate, adequate, or excessive? How would you change benefits going forward, and why?

We’d love to hear your thoughts in the comment section.