Academy Founding Member Paul H. O’Neill passed away on April 18th. Paul O’Neill’s career was characterized by candor, foresight, and courage. His tenure at Alcoa was marked by his commitment to worker safety and better labor relations. As Treasury Secretary in 2001 and 2002, he opposed tax cuts and urged more aggressive measures to combat global warming. He prided himself on being a non-ideological pragmatist who valued facts and evidence.

Before serving as Secretary of the Treasury under President George W. Bush, O’Neill was Chair and Chief Executive Officer of Alcoa and President of International Paper. He also served as Deputy Director of the Office of Management and Budget (then called the Bureau of the Budget). His first job after graduating college was at the U.S. Veterans Administration.

In 2005, Secretary O’Neill wrote “A New Idea for Social Security,” in which he suggested putting “$2,000 a year into a savings account from the day each child was born until he or she reached age 18.” He noted in the Pittsburgh Post-Gazette: “Over the last 30 years, both political parties seem to have stopped generating truly new ideas. And political mechanics have taken over in place of the visionaries who thought up Social Security in the first place.”

His experience as Treasury Secretary was the subject of Ron Suskind’s, The Price of Loyalty: George W. Bush, the White House, and the Education of Paul O’Neill, published in 2004. When O’Neill was terminated as Treasury Secretary in 2002, he was reportedly asked by then-Vice President Dick Cheney to say that his departure was his own decision. Paul refused, noting: “I’m too old to begin telling lies now.”

Among his legacies is the Paul H. O’Neill School of Public and Environmental Affairs at Indiana University, which “prepares students to address the issues of modern society in ways that more traditional schools overlook.” As described on its website: “Founded in 1972, the O’Neill School was the first school to combine public management, policy, and administration with the environmental sciences. It remains the largest public policy and environmental studies school of its kind in the United States.” O’Neill was also a consistent supporter of the Academy’s work.

Paul O’Neill epitomized how enlightened business leaders might add their voices and perspectives to national debates on public policy in general and social insurance in particular. We need more understanding of, and appreciation for, the business case for the vital role that social insurance plays in our nation’s economy.

Please join us in sending the O’Neill family our deepest condolences as they mourn the loss of a beloved husband, father, grandfather, and great-grandfather. May he rest in peace. 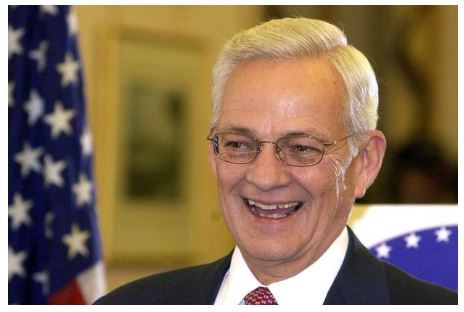