Uwe E. Reinhardt, James Madison Professor of Political Economy and professor of economics and public affairs at Princeton University’s Woodrow Wilson School of Public and International Affairs, passed away on Monday, Nov. 13, at the age of 80. I invite you to share your memories of Uwe by using the comment box below.

As a Founding Member of the National Academy of Social Insurance, Uwe was extraordinary in his commitment to our mission, and he made a number of significant contributions to the Academy’s work. In 1997, Uwe began serving on the Academy’s Study Panel on Medicare’s Larger Social Role, which issued its final report, Medicare and the American Social Contract, in February 1999. He also co-chaired our January 1999 conference, Social Security and Medicare: Individual versus Collective Risk and Responsibility.

Uwe added his unique voice and expertise to the Academy’s health policy work throughout the years. More recently, Uwe was a keynote speaker at our 2008 conference, Getting to Universal Health Insurance Coverage, and at our 2015 conference, Medicare and Medicaid: The Next 50 Years.

In the New York Times obituary, Uwe was described as “a national conscience in policy debates about health care.”

Of his many provocative writings on health care, one in particular stands out for me. In a Spring 1995 issue of Health Affairs Perspectives (“Turning Our Gaze from Bread and Circus Games”), Uwe wrote: “The nation’s leadership class was and remains deeply divided over the ethical precepts that should govern the distribution of health care.”

With his renowned caustic insight, he also wrote: “When America’s leadership class sets out to debate health policy, its members invariably preface their deliberations with the mantra: ‘We all want the same things in health care. We are merely arguing over the means to that end.’ This is utter nonsense.”

Just over a year ago, I watched Uwe give another entertaining and informative presentation at an Alliance for Health Reform/NIHCM Foundation Capitol Hill briefing. You can watch his presentation via the NIHCM website. I also recommend looking at Uwe’s July 2016 presentation, The Next Debate in Health Care: Transforming the Ethical Structure of U.S. Health Care, given at an Altarum Center for Sustainable Health Spending event.

As an economist, Uwe consistently introduced the ethical dimensions of health care into our national debate. He framed the two fundamentally different alternative views on the proper distributive ethic for American health care as being between “a pure social good to be available to all on equal terms and to be financed by ability to pay and a private consumption good whose financing is primarily an individual responsibility. In short, his framework addresses the essence of social insurance.

Uwe warned: “facing the aging of our population, growing income inequality, with many more poor Americans, the most expensive health system in the world, (and) rapid development of very expensive new medical technology, we shall abandon the erstwhile dreams of an egalitarian health-care system and instead develop platforms that will allow policy makers to ration health care by income class, without ever openly saying so or debating that policy.”

Many of us no doubt recall our own encounters with Uwe and his distinctive wit. The holiday card that he and his wife May sent in 1996 is one example that comes to mind for me. It featured “The Bridge To The 21st Century” with the warning “Just wait ‘til you get to the other side!” The cover showed a ticking time bomb.

Uwe’s passing is a great loss, but his voice lives on in the countless people he inspired. He was a renowned educator – whether he was talking to his students at Princeton or addressing attendees at one of the Academy’s conferences. I’m thankful for all that I learned from him, and, in his memory, let us redouble our efforts to advance public understanding of the options we have when it comes to the design of our nation’s healthcare system. 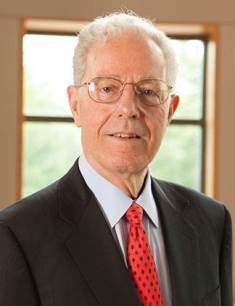