How do we assure that America's most popular and important domestic program achieves long-term financial balance?

On September 5, 2018, policy experts and local community leaders gathered at the University of Chicago's Gleacher Center to participate in an educational forum on the future of Social Security. The forum was anchored by a keynote presentation from Henry Aaron, a Senior Fellow at the Brookings Institution. Aaron laid out the current issues facing Social Security, the starkly different solutions that have been proposed by each party, and the program he recommends to be the foundation of political negotiations for progressives on changes to Social Security. Additional speakers included: Manasi Deshpande on disability policy research, Harold Pollack, Anna Rappaport, Renée Landers, Katherine Baicker, Diane Schanzenbach and Bill Arnone. (Aaron's presentation is available for download below) 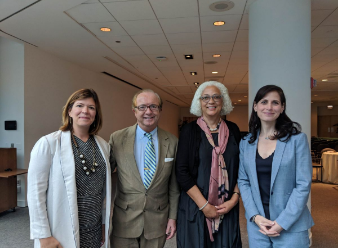 Henry Aaron first described a number of socio-economic changes that have taken place since the last major Social Security legislation in 1983. Some of these include decreasing “disposable Social Security income” due to rapidly increasing Medicare Part B premiums (which are deducted from benefits), and the increased disparity in life expectancy among top and bottom income deciles.

Aaron followed these changes with what he described would be “a sound program for progressives to introduce as a basis for” the future debate on Social Security. 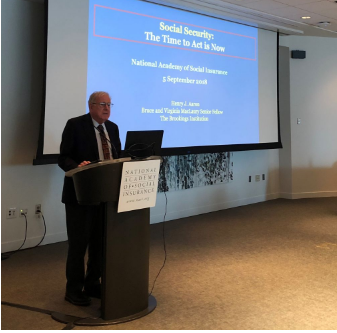 On the Inequality in Longevity Eroding the Progressive Benefit Structure

“Social Security, all along, has provided benefits that replace a larger part of the earnings of low earners than of high earners. But… shifts in life expectancy have significantly eroded the progressivity that that benefit formula provides… So, the first element of the program that I suggest would be to increase the progressivity of the basic benefit formula of the Social Security system.”

“The second, in recognition of growing earnings inequality, would be to raise, but not entirely eliminate, the maximum on taxable earnings under Social Security, and do so in a very gradual way over what amounts to 25 or 30 years, to bring earnings, the coverage back up to 90% of all earnings, the level that prevailed in 1983.”

On Benefit Reductions for High Earners

On Revitalizing the Special Minimum Benefit

“And the element that really deals with distribution, contains a little known provision because nobody, literally nobody longer qualifies for it, a provision that was introduced by Congress a few decades back to provide a more generous benefit than the basic benefit formula would offer to workers who have long careers at low wages, and because of the way that provision was adjusted for earnings and prices, it has covered progressively fewer and fewer people until today, it covers nobody at all, so the fourth element would be to modify that and reestablish it as a significant source of income for long-term low earners.”

On the Spousal Benefit

“The next provision takes account of the, in one sense the change in the status of women, and in another sense, the non-change in the responsibilities of women… Here [we] would gradually phase down, but not eliminate, the reach of the benefits that is provided to nonworking spouses, or to lesser earnings spouses, so that benefits would move toward becoming a pension for each worker based on his or her earnings.”

“I’m suggesting a provision that would provide some additional benefit based on childcare dropout years, childcare years of parents of either sex, to try and somewhat offset those costs [of raising children, including decreased future earnings].”

On Increasing Benefits (with a Cap) for Long-term Beneficiaries

“Once you’re on Social Security, your benefit is protected against price inflation, but to the extent that there’s a general increase in living standards, that isn’t factored into benefits, nor is the behavioral fact that as people age, other sources of savings and income tend to diminish. People can claim benefits and still work part time. They may have built up savings which become depleted… So one possibility, which I think deserves to be a part of this plan, would be to provide a modest increase in benefits to those who have been on the rolls for a period of time—that benefit should be capped so that it has its effect, its larger relative effect for comparatively low earners.”

On the Age Limit for Child Dependents

“The limit on when child benefits, the age limit on which children cease to be eligible for Social Security, which dropped to 18 under previous legislation, should be raised to help support continuation in college.”

“And finally, last but not least, the plan that I described up to this point gets rid of most, but not all, of the financial shortfall in the Social Security system on the average over the long-term. But in the far out years toward the end it falls short, pretty seriously, of providing sufficient revenues. So the final two elements are proposed tax increased: one from earmarking of state and gift taxes, I suggest, at the level that prevailed before the recently enacted tax bill, and the final element is an increase in payroll tax rates, timed for 2060 and 2080.

We invite you to share your comments on Henry Aaron's proposal. Please use the Comment box below. 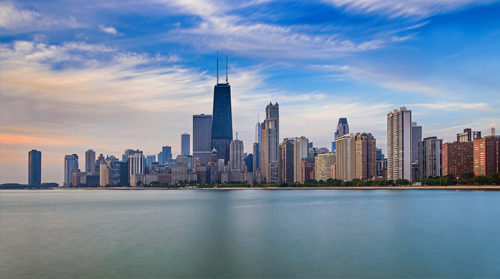