The Myth of Health Care Costs

The 2014 NASI conference on “Strengthening the Web of Financial and Retirement Security for Today’s Working Americans” was an experience I will not soon forget. No doubt it was inspiring. When I think about the web of financial and retirement security instruments, whereas I used to perceive nothing short of an uncomfortable future, I now feel a bit at ease knowing that so many of the illustrious folks I met at the conference are hard at work safeguarding Medicare, Medicaid, and Social Security.

I do, however, still very much worry that the unchecked threat of health care costs will overwhelm retirement security. They are, as the conference theme suggests, very much interrelated to financial securities, defined benefit plans, defined contribution plans, and more. The effects of this long-term issue remain to be seen and I, personally, do not want to see them.

It seems to me that cost in health care is almost mythical. No one seems to really know what anything costs. All we know is what is charged by providers (insurance companies, hospitals, doctors, drug and device companies, etc.), the vast majority of whom appear to be making a profit (even non-profits accumulate sizeable surpluses and have very well paid executives). Is it fair to profit from the often devastating misfortunes of others, given that the health care marketplace is one people enter through no choice of their own and disproportionately affects the elderly and most vulnerable? No one seems to ask questions of morality as they are, perhaps, seen as externalities in this so-called marketplace. In a February 2013 Time magazine article, Steven Brill started when he asked, “…why exactly are the bills so high?” I’m wondering why more folks aren’t asking this question. Does anyone else feel uneasy when visiting their health insurance or hospital’s website and the navigation bar has buttons for ‘Patients,’ ‘Providers,’ and ‘Investors?’

Katherine Swartz from the Harvard School of Public Health presented on the “Likely Effects of Increasing Cost-Sharing for Medicare Beneficiaries.” She noted that the effects of increases in Medicare cost-sharing will depend on “other factors” likely to change: income and pension changes, retiree benefit changes, medical advances and costs of various diseases, and life expectancy after age 65. What she left out was profits. Profits in the health care industrial complex will certainly affect Medicare cost-sharing. While for-profit health care has been associated with lower quality care and poorer outcomes, there are more than 600 publicly traded health care companies. Ms. Swartz recommends, among other things, reducing the amount of unnecessary care. While there certainly is unnecessary care that is provided, it’s not so black and white. It differs nationally by geography. In some places care is underused. In others it is misused. Moreover, if the price of a simple chest x-ray was aligned with its true cost, might it be less of a concern that the test was unnecessary? Illness is unpredictable and its course is ambiguous. It is difficult and morally problematic to make decisions at the bedside based on cost, when no one knows what anything really costs.

The health care cost discourse popularly involves physicians and the fee-for-service payment model. While physicians, some more than others, are somewhat culpable for rising costs, they’re not the biggest fish. A multitude of myopic public policies on all levels (notably those that exacerbate income inequality) along with for-profit and non-profit corporate systems, pharmaceutical, and device companies are the bigger issues.

Gilead Sciences Inc. recently released the most effective oral treatment for Hepatitis C, Sovaldi. The drug has been priced at $1,000 per pill. A full round of treatment—about eight weeks—costs around $84,000 Gilead has received criticism for pricing the drug so high and the best their spokesperson can muster up in response is that it is cheaper than a liver transplant. However, the same eight week treatment has been priced by Gilead at around $2,000 in India, where I’m sure that they are also making a profit. Is this not price gauging? Another company, Questcor, discovered that an old anti-inflammatory drug, Acthar, was effective in treating a rare and sometimes fatal epileptic disorder in infants. When it was used for gout, it cost around $50 a dose; after discovering its new use, they have priced it at $28,000 a dose. How are health care costs ever going to be controlled with behavior like this? I surmise, as Ms. Swartz’s presentation suggested, that much of the cost will be passed on to beneficiaries, whom increasingly have smaller incomes and less retirement savings.

Patients have, somewhere along the line, been turned in to consumers and medicine has gone from an art to a cash cow. A few years ago I attended a biotech conference here in the Bay Area and witnessed diseases being referred to as markets (i.e. the diabetes market or the AIDS/HIV market). The US is the only country in the world that allows drug and device companies to advertise directly to ‘consumers.’ Why the American exceptionalism here? Forget the jingoist rhetoric about having the best health care system in the world. I don’t buy the arguments that huge profits are required for incentivizing research and innovation either.

Perhaps Medicare, with lowest overhead cost of any payer, isn’t the problem with rising costs but the charges presented to Medicare are. Why are the bills so high? Blue Cross and Blue Shield of North Carolina, a not-for-profit organization, reported $92.6 million in net income (profit) for 2013. Why? I’ve focused on big pharma here (because I think not enough attention is focused on it), but there are many more industries making a lot of money off of sick people. Is health care a right? Philosophically, I don’t think so. I do think it is a public good, however. Is this anti-capitalist or does it just make sense when something is egregiously out of control and poses a huge threat to the security of a body politic to reining it in?

James Westly McGaughey is in a joint Master of Public Policy and Master of Business Administration program at Mills College. His primary interests are in retirement security, specifically of low income earners, in light of the economic downturn. James’ professional experience with Sutter West Bay Hospitals as a research analyst and California Pacific Medical Center as a research associate has propelled him into the fields of healthcare policy, research, and bioethics. In his current work in a bioethics unit at California Pacific Medical Center, he directs research, writes grants, guides ethics quality improvement projects, and administers the hospital’s ethics committee. He lives in San Francisco with his partner and their dog. McGaughey was one of six students and young professionals awarded a scholarship to attend NASI’s 26th annual policy research conference January 28- 29, 2014, in Washington, DC. 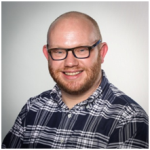