Why aren’t we talking about increasing Social Security benefits?

Home/Discussions  / Why Arent We Talking About Increasing Social Security Benefits

For a long time – even before some of the current crop of presidential candidates began accusing America’s most successful public program of being nothing more than a “Ponzi scheme” – the national conversation about “fixing” Social Security has centered around cutting benefits or raising the retirement age (also a benefit cut, albeit by another name). Since Social Security does not contribute to the deficit, and is actually running an impressive $2.6 trillion surplus, there is no need to panic about the program’s projected long-term revenue shortfall. A report released today from the Commission to Modernize Social Security suggests that, instead of rushing headlong into hasty cuts, thoughtful policymaking can address Social Security’s long-term solvency while also modernizing the program to meet the needs of more people who depend on Social Security for economic security.

The Concern with Big Cuts to Modest Benefits

The report, Plan for a New Future: The Impact of Social Security Reform on People of Color, focuses on the demographic shifts that will affect Social Security’s proven track record of providing a critical source of income for beneficiaries. The report notes that people of color will become the majority of Americans within the next three decades and explores why and how people of color depend on Social Security differently than white people. For instance, nearly three-quarters (74 percent) of white Social Security beneficiaries receive retirement benefits, while the majority (58 percent) of beneficiaries of “other” racial and ethnic groups receive disability or survivor benefits. The report details the socioeconomic reasons for this difference and points to areas where Social Security could do a better job in serving vulnerable populations – mainly by improving the process for determining an applicant’s disability and ensuring that agricultural and domestic workers are covered by the program and its benefits. But one of the report’s most compelling points is the case for increasing Social Security benefits.

Social Security is a social insurance program, not a welfare program, which the National Academy of Social Insurance (NASI) describes as encompassing “broad-based systems for insuring workers and their families against economic insecurity caused by loss of income from work and the cost of health care. ” President Lincoln expressed this sentiment more poetically, noting that “the legitimate object of government is to do for a community of people whatever they need to have done but cannot do at all or cannot do so well for themselves in their separate and individual capacities. ”

Social Security, like other social insurance programs, is not a hand-out, but rather an insurance policy that workers pay for to protect themselves for when they can no longer work. Since 1935, when the Social Security Act was passed, this system has worked extremely well—sharply reducing poverty, especially among the elderly—despite the fact that benefits are modest by any measure (the average monthly benefit in 2011 is $1,177 for retired workers). When Social Security was enacted, it was assumed that private pensions would supplement Social Security benefits. With fewer and fewer employers providing pensions today, reliance on Social Security has increased: nearly two in three people 65 and older get half or more of their income from Social Security. For people of color, reliance on the program is even greater: Social Security benefits are the only source of income for two out of every five Latino and African American retiree beneficiary households. This adds to the urgency of modernizing the program to meet the needs of changing economic and demographic realities.

Many experts, including the Commission to Modernize Social Security, are focusing on how to improve benefit adequacy in addition to staving off unwise and unwarranted benefit cuts.

But can we afford adequate benefits?

In 2009, NASI published a report, Fixing Social Security: Adequate Benefits, Adequate Financing, which provided specifics about the impact and cost of various proposals to improve benefit adequacy without breaking the bank and options to strengthen the systems finances. The Commission report builds on these analyses, providing a blueprint for policymakers to modernize Social Security to fulfill its role for the American people of the future.

The report shows that by:

Social Security will be able to:

From the new report, Plan for a New Future:
The Impact of Social Security Reform on People of Color.

Listening to What Americans Want

The NASI survey also asked respondents on how they felt about some of the proposed policies, outlined above, for increasing Social Security’s revenue and expanding benefits. The responses show that Americans are overwhelmingly in favor of the kind of policies the Commission is proposing:

Another survey, released last week by the Institute for Women’s Policy Research, reaffirmed that, across age groups, race and ethnicity, and gender, the majority of Americans in every group do not mind paying Social Security taxes. Furthermore, most Americans believe we should increase Social Security benefits.

Finding common ground among policymakers in an increasingly polarized political climate is difficult, but Americans have already expressed broad agreement that Social Security benefits are important and should be increased if possible. Regardless of party affiliation, age, race, or gender, most Americans do not mind paying Social Security taxes and want to improve benefits rather than cut or otherwise weaken the vitally important insurance protections that only Social Security provides. Before embracing cuts that won’t alleviate any short-term deficit concerns, and that could undermine long-term economic security for millions of American families, policymakers should step back and take the time to consider the alternative: providing adequate benefits that meet the needs of 21st century families. 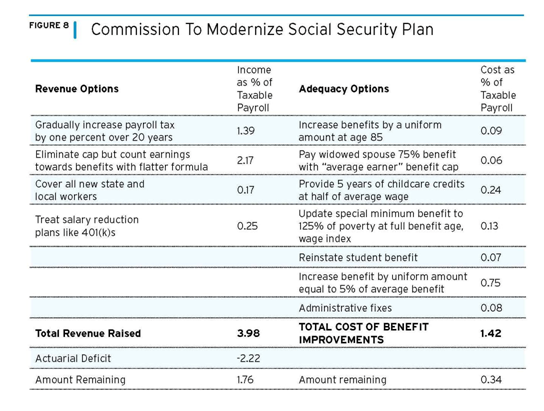