As part of the Academy’s continued focus on income and wealth inequality, expert panelists convened at the National Press Club on June 21st for Advancing Equity and Inclusion through Social Insurance, three discussions that explored how public policies can bolster American family stability in an evolving economy. Recognizing how economic opportunity and mobility are affected by entrepreneurship, paid time away from work for caregivers, and the entrenched wealth divide between whites and people of color, panelists affirmed that social insurance programs provide a critical safety net for risk-taking, retirement planning, and family caregiving.

On the first panel, “Insuring Innovation: Entrepreneurs and Social Insurance in an Aging and Diverse Society,” participants from academia, think tanks, government, and advocacy organizations discussed how social insurance can help support entrepreneurship, which is integral to job creation and growth, especially during periods of economic recovery. With this in mind, AARP’s Jean Setzfand and Justin Tanner of the Minority Business Development Agency stressed the importance of increasing the capacity for growing populations of older Americans and people of color to embark on new business ventures. As previously covered by Walter Frick, panel moderator and an associate editor at the Harvard Business Review, economic insecurity can limit the number of business risks people are willing to take; on the other hand, a supportive social-insurance infrastructure can create an economically secure environment for innovators to pursue their entrepreneurial potential, hiring workers in the process. Research from panelist Gareth Olds, professor at Harvard Business School, reinforces this point, concluding that food assistance and Medicare have a sizable effect on self-employment rates. Yasuyuki Motoyama, Director of Research and Policy at the Ewing Marion Kauffman Foundation, described the potential of a government-supported network of local connections for peer-based learning and collaboration; he argued that when a person witnesses a peer’s success, they’re more likely to consider themselves capable of starting a business. 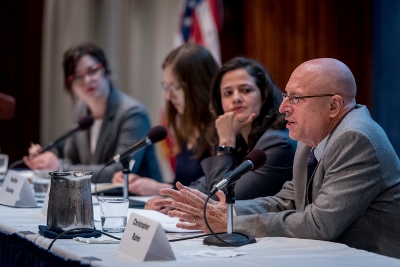 Encouraging caregiver participation in the labor market emerged as a pivotal theme of the day’s second panel, “Unequal Access to Paid Family Leave: A Key Source of Disparities in the Workforce.” Heather Boushey of the Washington Center for Equitable Growth kicked off the discussion by portraying societal changes that have occurred in the U.S. since 1960, namely a decline in the number of women who are full-time, stay-at-home caregivers. Family composition is different and varied today, and many households have two earners, a single-parent breadwinner, or multiple generations living at home. Now that caregivers are in the labor market, Boushey argued, policies that make it easier for caregivers to remain at work are critical. The U.S. cannot remain economically competitive with continued workforce reductions, she continued, a point echoed by Aparna Mathur of the American Enterprise Institute. Panelists agreed that the Family Medical Leave Act, which offers job protection for a period of unpaid leave, is an important step toward acknowledging family responsibilities for workers, but the law excludes many, such as those employed for less than a year. Christopher Ruhm, professor at the University of Virginia, outlined the multiple forms of inequality perpetuated by current family leave policies: first, between men and women; second, among women with differing access to benefits; and third, between employers, as those who offer paid leave don’t necessarily offer it to all of their employees. 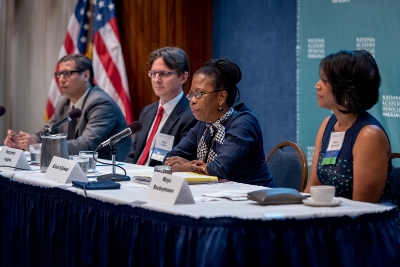 In the final panel, “What Is Social Security’s Role in Reducing the Racial Wealth Gap?” speakers highlighted the stark difference in retirement wealth between white Americans and people of color. “Wealth inequality is not a fading remnant of bygone discrimination,” said the Academy’s Benjamin Veghte.  Panelists evidenced that structural factors that drive the nation’s economy necessitate Social Security, an intergenerational program that plays a vital role in mitigating this racial wealth divide. Kilolo Kijakazi of the Urban Institute underscored essential ways that Social Security can be reformed to come to terms with disparate rates of poverty, disability, and morbidity, including improving the adequacy of benefits, restoring the survivor’s benefit for students, and eliminating the cap on taxable payroll. Maya Rockeymoore of the Center for Global Policy Solutions highlighted how the racial wealth gap is widened by inefficiencies in the labor market, like disparate access to private pensions and the Great Recession’s disproportionate affect on younger workers.

Thanks in large part to the work of these panelists, the work of supporting promising entrepreneurs, achieving modernizations to maintain caregivers’ positions in the workforce, and reducing economic inequality have been identified. Further research is needed to create recommendations for policies that address the specific needs of a variety of workers and their families. 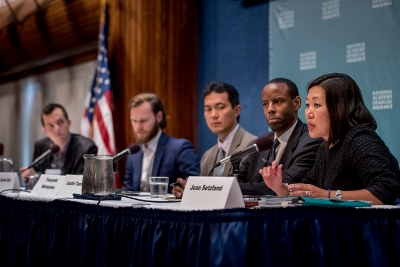