During the 2016 campaign, President Trump promised not to cut Social Security. Yet the White House’s FY 2018 Budget proposes up to $64 billion in cuts to Social Security Disability Insurance (SSDI) expenditures. The cuts stem mostly from measures to “test new program rules and processes and require mandatory participation by program applicants and beneficiaries,” with the objective of moving disabled beneficiaries from the SSDI program into fuller labor market participation.

While supporting work is a laudable goal, since 1980, Social Security has initiated eight demonstrations to promote return to work, and “none of the findings reported to date show that the demonstrations tested would likely lead to a substantial reduction in caseload sizes.” Given that the Administration’s budget presumes a 5 percent reduction in SSDI outlays from these measures, there is cause for concern that these measures would go beyond work supports to include explicit or implicit eligibility restrictions. Enabling people with disabilities to increase their participation in the labor force could be achieved without restricting eligibility by, for example, improving the availability of long-term services and supports to people with disabilities seeking to work. The more than $600 billion cuts to Medicaid proposed in this budget would run counter to this goal.

The Director of the Office of Management and Budget has suggested that, in most people’s minds, disability protection is not part of Social Security. The White House refined the President’s commitment as not touching “core” Social Security benefits. SSDI is integral to workers’ Social Security protections. Through their contributions to Social Security, workers earn a measure of protection—not just in old age, but throughout their adult lives. Workers and their families are insured against loss of income due to three sets of risks:  disability, retirement, and death. As with auto, homeowner’s, or fire insurance, no one knows in advance which type of insurance they will end up relying on most. Some experience disability and need to turn to the system’s disability insurance; some live very long lives and rely more heavily on Social Security’s old-age insurance; and others lose a spouse and rely more on the system’s survivor insurance. The system replaces a portion of lost family earnings in all three cases.

A working-age individual faces a 1-in-3 chance of dying or experiencing a disability that qualifies for Social Security before retirement, meaning many of us and our families may have to turn to Social Security’s disability or survivor protections to make ends meet. Almost 9 million working-age adults receive Social Security benefits due to a disabling condition that makes them unable to work. In addition, 6 million survivors of deceased workers, 3 million children and spouses of retired workers, and 1.8 million children and spouses of disabled workers receive benefits.

Disability Insurance protects a worker against loss of earnings due to a significant work-limiting impairment. Workers earn DI protection by having worked and contributed to Social Security. The disability standard is strict: Only individuals who have a medically determinable physical or mental impairment that precludes substantial work activity, and that is expected to last at least a year or result in death, are eligible for benefits. Cash benefits are paid only after a five-month waiting period, and most beneficiaries become eligible for Medicare through DI only after a two-year waiting period. Applicants meet the test only if their impairments are of such severity that they are not only unable to do their prior work at a substantial level, but also unable – considering their age, education, and work experience – to engage in any other substantial gainful activity that exists in the national economy. The Social Security Administration (SSA) considers someone to be engaged in substantial gainful activity if the person earns more than $1,130 a month.  The average benefit is about $1,170 a month, or $14,000 a year.

Social Security’s disability protection is particularly important to older Americans. The risk of work-limiting health problems rises sharply with age, and hence most people receiving DI benefits are in their 50s or early 60s. Three-fourths of DI beneficiaries are over age 50, and one-third are over 60. Before becoming eligible for benefits, two-thirds of these workers had unskilled or semi-skilled jobs. Fewer than one in six have a college degree. While benefits are modest, they are of vital importance to the families that receive them. Over half of DI beneficiaries in their 50s and 60s rely on DI benefits for 75% or more of their total income.

Social Security is one system. It consists of two funds that provide three forms of insurance. Disability insurance is a critical part of Americans’ Social Security protections. 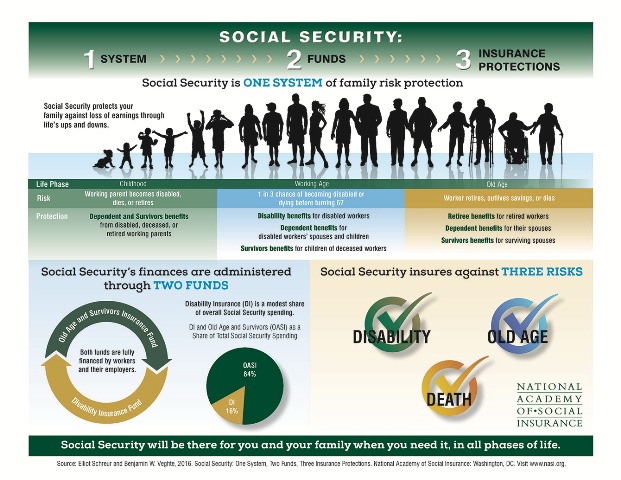