Researchers, policymakers, stakeholders, and advocates travelled from all over the country to attend the Academy’s 30th Annual Policy Conference in Washington, D.C. on January 29-30. The Academy chose “Nonstandard Work and Social Insurance: Designing Risk Protections for a Changing Workforce” as the topic of our 30th annual conference because it reflects one of the most urgent issues facing social insurance policy today. Alternative work arrangements are creating gaps in social insurance coverage – gaps that are growing every day. A variety of stakeholders, policymakers, and experts are working diligently to find ways to fill these gaps, but to date no consensus solutions have emerged. Our conference sought to move the debate forward by drilling down on what the coverage gaps look like in the areas of injury or illness at work, unemployment, retirement preparedness, and ability to take paid leave to care for a loved one, and by identifying potential solutions.

The first task in designing risk protections for a changing workforce is to get a better sense of the problem – what kinds of work arrangements are these, and who is engaged in them? The opening keynote and the first panel of the conference shed light on these questions. In the opening keynote, David Weil, Dean of the Heller School for Social Policy and Management at Brandeis University, drew on his experience as the Administrator of the Wage and Hour Division at the Department of Labor in describing the mechanisms that have led to the “fissuring” of the workplace, as well as the effects of this trend on workers’ risk protections. As companies have shed factors of production in recent decades to become leaner firms, these functions have been outsourced to subcontracted firms. These subcontracted firms in turn seek to achieve a pared-down structure by engaging further subcontracted firms and subcontracted independent workers. Each firm at each layer of outsourced work must extract profit from smaller and smaller wedges of the total enterprise. To maximize profit in this fissured business model, many firms engage independent contractors instead of employees. Doing so reduces labor costs for the firm, but shifts risks onto workers who often lack social insurance protections like unemployment insurance and workers’ compensation due to their status as independent contractors.

After Weil’s statement of the problem, the first panel attempted to identify the population of American workers engaged in alternative work arrangements. Anne Polivka of the Bureau of Labor Statistics and Katharine Abraham at the University of Maryland are two leading experts on the measurement of the prevalence of nonstandard work. While acknowledging the complexities and ambiguities involved in such estimates, they pointed to research showing a rise in the kinds of work arrangements described in Weil’s keynote address. Douglas Holtz-Eakin, the President of the American Action Forum, and Derecka Mehrens, the Executive Director of Working Partnerships USA, followed with two starkly different visions of the implications of this rise in nonstandard work arrangements. For Holtz-Eakin, alternative work arrangements represent economic innovation and provide opportunities for advancement and flexibility. Mehrens focused on the other side of these work arrangements: the lack of workplace rights and protections that suppress worker voice and decrease financial security.

The four panel discussions that followed further explored the implications of nonstandard work arrangements on workers’ risk protections. The panels each first identified a work-related risk, then explored ways to protect nonstandard workers against that risk. Panel 2 identified the risk of workplace injury. The first two presenters, John Ruser, President and CEO of the Workers Compensation Research Institute, and David Michaels, a Professor in the Department of Environmental and Occupational Health at the George Washington University School of Public Health, offered evidence that nonstandard workers are at greater risk for workplace injury than similarly situated traditional employees. David Torrey, a Workers' Compensation Judge in Pennsylvania’s Department of Labor & Industry, and Jennifer Wolf-Horejsh, the Executive Director of the International Association of Industrial Accident Boards and Commissions (IAIABC), described the existing protections for such injuries, explained the gap in coverage for nonstandard workers, and offered ways to expand coverage to include these workers. Among the solutions discussed were statutory employer laws, variations on the Black Car Fund in New York City, alternative occupational accident insurance, and portable benefits.

Panel 3 identified the risk of lost income due to unemployment and explored existing protections against this risk for nonstandard workers. Stephen Wandner, a premier expert in unemployment insurance (UI) and Senior Fellow with the Academy, described the current parameters of UI coverage, noting in particular the limitations of the current program to cover many workers in nonstandard arrangements. Andrew Stettner, a Senior Fellow at The Century Foundation, and Rachel West, the Associate Director of the Poverty to Prosperity Program at the Center for American Progress, offered strategies for adapting the system to enhance protections for nonstandard workers. Stettner advocated for reframing the discussion with respect to nonstandard workers, moving away from the risk of unemployment and towards a broader conception of the risk of earning less income than one needs at a particular time. West proposed a supplementary system to attach to the existing UI system that would offer a job seekers’ allowance to all workers – including nonstandard workers, who are currently seeking, but have not yet found, employment.

The luncheon keynote, which took place in between this series of panels, featured a groundbreaking, bipartisan discussion of reforms to one of the central social insurance programs protecting workers today: Social Security. Henry Aaron, a foremost expert on Social Security, unveiled his vision for Social Security’s future. His plan would make targeted programmatic improvements to expand coverage for caregivers, child dependents in school, and lower earners, while increasing revenue by raising the taxable maximum and the tax rate, including employer-provided healthcare premiums in the wage base, and dedicating estate and gift taxes to Social Security. Aaron then engaged in open dialogue with two colleagues from different political persuasions on the potential for a reform consensus centered around his proposal. Nancy Altman, the President of Social Security Works and Chair of the Strengthen Social Security Coalition, argued that Aaron’s proposal approached the dangerous territory of previous proposals that would put the program on a slippery political footing by limiting the wage-relatedness of the benefits. Jason Fichtner, a Senior Research Fellow at the Mercatus Center at George Mason University, interpreted Aaron’s proposal as the opening bid of the progressives’ plan for the program, but argued that it would eventually have to be brought to the middle in any bipartisan consensus deal on Social Security.

Continuing the thread of panels examining risks and risk protections of nonstandard workers, panel 4 concerned itself with ensuring that workers have adequate income in retirement and disability. The three presenters offered a range of policy solutions for addressing these risks. The Academy’s Research Associate, Elliot Schreur, explained the current limitations in Social Security coverage for independent contractors, who are supposed to be fully covered by the program at parity with traditional employees, but who in actuality receive less robust coverage from the system against the risks of losing income due to retirement and disability. David John, a Senior Strategic Policy Advisor at AARP, examined ways to bolster another component of workers’ retirement security, namely individual savings. He proposed adapting electronic financial tools to facilitate automatic contributions from workers, and potentially even from the firms engaging independent contractors, into individual accounts earmarked for retirement. Shayna Strom, a Senior Fellow at The Century Foundation, shed light on the knotty legal problems that undocumented immigrants face in preparing for their retirement, and offered ways to remedy the situation.

The last of the panels discussing specific work-related risks explored those associated with caregiving, both from the perspective of the nonstandard workers who need time off from work to provide care, and from the perspective of the professional care workers who face notoriously challenging working conditions. Moderator Anna Wadia, a Senior Program Officer at the Ford Foundation, guided a discussion of the problems facing caregivers and care workers and opportunities for policy change. Heidi Hartmann, the President of the Institute for Women's Policy Research (IWPR), offered insights on strategies for enhancing protections for working family caregivers, such as extending social insurance protections to provide coverage against the financial risk of a family’s need for child care or long-term services and supports. Sherry Leiwant, Co-President and Co-Founder of A Better Balance, described the process of developing New York state’s recently enacted paid family leave program, and discussed both the successes and challenges the state faced in ensuring coverage of nonstandard workers under the new law. Caitlin Connolly, Director of Social Insurance at the National Employment Law Project, addressed the unique challenges and barriers that paid home care workers face in accessing risk protections and coverage under our current social insurance systems.

A concluding panel was charged with framing all of the preceding discussions into a coherent architecture for nonstandard workers’ risk protections. The Academy’s Vice President for Policy, Benjamin Veghte, led the discussion with five experts who held diverse ideas for the future of risk protections for workers. Peter Barnes, an independent writer and entrepreneur, made the case for universal social dividends funded from shared community resources that could provide a base income for all Americans, including nonstandard workers. Althea Erickson, the Senior Director of Global Advocacy and Policy at Etsy, shared a vision for the role of labor platforms in providing the infrastructure for a system of universal tax withholding that would apply to nonstandard workers and to the independent sellers on Etsy’s platform. Aparna Mathur, a Resident Scholar in Economic Policy at the American Enterprise Institute, emphasized the importance of balancing innovation and opportunities for advancement in the economy with needed protections for nonstandard workers. Carmen Rojas, the CEO of The Workers Lab, encouraged the attendees to expand their conversations about social insurance to include worker voice and financial empowerment by establishing a more robust safety net that would improve the lives of both traditional and nonstandard workers. Rebecca Smith, Senior Counsel at the National Employment Law Project, emphasized the importance of universal, portable benefits and echoed Rojas’s call for amplifying worker voice through unionization and organized campaigns like the Fight for 15.

The end of the conference did not represent the end of the conversation for the Academy. The conference marked the beginning of a two-year strategic plan to research and identify policy options to protect nonstandard workers against economic risks through social insurance, and to provide technical assistance drawing on these findings to policymakers, employers, and advocacy groups at the national, state, and local levels. 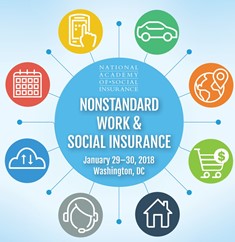